Frank describes his writing style as narrative; as if he were verbally telling a story or an event in time. He wants the reader to feel as if he he or she were experiencing it first hand as in a dream or watching a movie. He says, “I try to inject influences from actual current or past events into the storyline as well. This tends to hold the attention of the reader all the way to the conclusion. That is what I believe sets me apart.”

Frank started writing about 2½ years ago. The first storyline came to him in his sleep. “I awaken in the middle of the night with an idea that I thought would make a great movie, A story of a action adventure and love for my ‘Baby Boomer’ generation.”  This grew into trilogy still in the works.

His inspiration for Gabriel’s Chalice struck him after a morning bible reading of LUKE 21:11 which describes signs that will foretell the return of Jesus Christ, including great earthquakes, pestilence, famines, and terrors from heaven. At the time, a great volcano was erupting in Iceland and he thought, “This would make a great novel.”

Frank says his biggest problem is that he gets so many ideas for different story lines in different genres that he has multiple projects going at the same time.  “I am very busy but I love it. I currently have an idea for another book but I am not even starting that right now—I have too many in the fire.”

Frank’s projects start with and idea for a story and the conclusion he has in mind. He produces an outline for the story, and fleshes out the development of his characters. From that point, it is a matter of filling in the details, and this is where Frank says he often finds the most work. This is true for many writers. It can prove a challenge to render real some stories we envision. Some book ideas make a promising start, only to stall out in development. Some come out differently than we originally envision, while yet others dwindle on the vine because they never quite mature. The key is to keep the ideas coming, as Frank does.

“I have been very busy. I currently have a book published and I have written two other novels that are now in the editing stage and I am currently writing two other manuscripts, with one percolating in my head. . . I also am currently involved as a contributing author in a joint writing project with a writing blog,” Frank says. 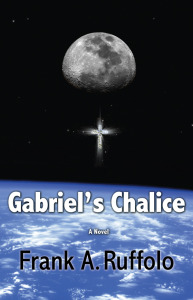 Frank’s current title is Gabriel’s Chalice, a faith-based Science fiction novel set in the year 2028. Mankind is threatened by plagues and pestilence and vast global disasters.  Spewing volcanoes cover the earth with a dense cloud of ash. The earth is faced with a threat of another ice age, plagues threaten life on earth as we know it, and signs in the sky appear over Jerusalem. God sends the Archangel Gabriel with an incredible message for mankind. Dr. Rapahel Matteo, a leading geologist and volcanologist with NASA, anxiously studies the signs and disasters foretold in Luke 21:11 of the New Testament. He encounters the Archangel Gabriel during a walk outside of Moon Base Challenger.

Gabriel’s Chalice  has been reviewed by readers on Amazon and Barnes and Noble is currently on several reviewer TBR lists. Frank says reviews have been good.

He advises aspiring authors, “Put your ideas down on paper or in your computer. Make an outline and do not be discouraged with rejection. Accept denial and move forward. Be prepared to edit, edit, edit. If a guy like me, who failed his 12th grade English regents exam can do it, so can you.”

Learn more about Frank Ruffolo and his books at his website. You can also find Frank on Facebook. “Gabriel’s Chalice” is available from Amazon in print or Kindle format, and through Barnes and Noble in print or for Nook e-reader.

One thought on “Meet the Author: Frank A. Ruffolo”