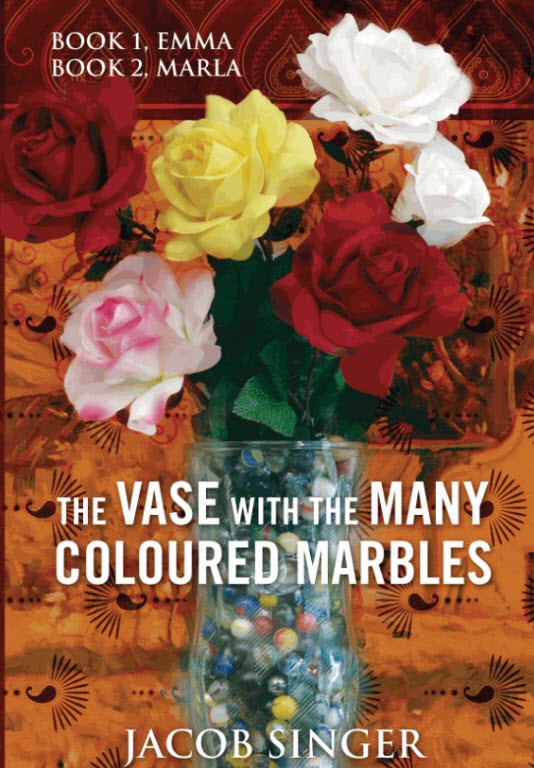 Today we get a sneak peek at author Jacob Singer’s story, The VASE with the MANY COLOURED MARBLES.

ntjies was born into the Cape Coloured community in District Six of South Africa. South Africa was a country that classified all citizens that were not European (White) as second class citizens, with restrictions as to how they may live.

With the election of the National Party as the ruling party in 1948, apartheid came into full force. This dramatic story tells how Emily jumped the racial barrier, establishing a life for herself in Johannesburg. How she changed her name to Emma Kline, and became a WHITE.

The VASE with the MANY COLOURED MARBLES is available on Amazon.com and other online bookstores.

“Where the hell do you think you are going?”

Nellie looked at her boss. He had shouted at her in Afrikaans as she left the table where she sorted and wrapped the peaches for the market. She looked down as she felt her water break, the fluid dribbling slowly down her leg.

“Baas,” she cried out, “I have to go. The baby is coming.” She had always thought that she was only eight months pregnant, which was why she continued going to work. “I have to get home,” she shouted, her face a picture of horror at what had happened, “and quickly.”

“Well, see that you are back at work tomorrow,” he shouted after her as she hurried out the door, hiding the wet spot on her dress with her coat. She started running down the road towards her house as the first labour pain hit her. ‘Liewe Hemel, Good heavens’ she thought as she gritted her teeth, bending over in agony. ‘but this one is different from Jonas. It wants to come, and quickly. I hope I make it home.”

Jonas was her first baby, born a year and a half earlier. She had delivered him in her bed at home, with her neighbour Patricia, as the midwife.

Another labour pain hit her, and she doubled over with the cramp, a cry of pain escaping from her lips. Her home was not that far from where she worked, but as the labour pains started to come quicker, it seemed like 100 miles away.

Nellie’s meager diet had kept her weight down, and her pregnancy had not been that obvious to anyone. She started feeling the pressure of a child wanting to be born. As she passed the Peninsula Maternity Home, she decided to walk into it rather than attempt to walk home and have Patricia help her deliver it.

Two hours after Emily had been born, her delivery helped by nurses at the Home, Nellie dressed herself, collected her belongings and with a newborn baby cradled in her right arm, walked unseen out the back door of the Home.

‘Ag Hemel,’ she thought as she walked home, ‘what a day.’

Jacob Singer is the author of Brakenstroom and The Vase with the Many Coloured Marbles, available at Smashwords  and Amazon.com . He grew up in South Africa, and was a witness to much of that country’s controversial history. In 1992 he and his family emigrated to Canada, where he is now writing and managing financial portfolios. Learn more about author Jacob Singer from his website. You can also follow him on Twitter.

5 thoughts on “Sneak Peek: The Vase with the Many Coloured Marbles”