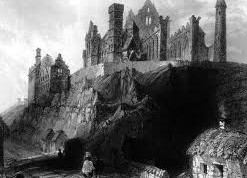 There was once a lad the villagers nicknamed The Red-Haired Man. He would only come out when he heard a mortal was in trouble. It was rumoured that he was half creature and half-human. His mother had been an Irish lassie of the fairest beauty in the land. She disappeared in the midst of the twilight hours one St. Patrick’s Day, leaving behind a baby boy with shocking red hair, all wild with curls upon curls and eyes as green as the Emerald Isle itself. The village Healer knew this infant was of special quality and she quickly took him under her care.

The Healer packed up her cabin one day and walked off into the woods with the infant and some magic lotions, pouches of secrets and more. For she’d seen his future in one of her psychic visions and wanted to protect him from both realms: the earthly and the magic. If they were to learn of his abilities he would be hunted down like a wolf and shot on the spot. She travelled many roads and paths with this infant who grew into a man. She had promised Rose, his mother, that she would protect him until the rising of the blood moon and his transformation from human to a creature would occur…

He enjoyed his time in the human realm and understood when his twenty-first birthday came he would have to go into hiding away from the mortals and the gods if he was to survive. There was a traitor among the gods from which the Healer could not protect Rose, but she vowed to protect the defenceless babe. He learned about mortals and fell in love with their ways, and did not want to abandon them to live a secluded life. He learned of his heritage and became the best son and creature any mother would be proud of.

The Healer was getting old. She had raised the child/creature to be able to survive in both realms. One night, when the moon was full, he had an urge to go exploring. Hiking down a dark trail under the starry skies, he saw blinking lights in the distance. Curious, he followed the glow and came upon a medieval castle that looked abandoned. He knew he should have told his adopted mother that he was going on a hike so if he did not come back soon she would not worry about him. He took a step onto the drawbridge and a little whisper in the wind called to him, “Shane, Shane me lad for if that is your name, ‘tis my wish to grant thee three wishes, come and follow me voice”.

Shane decided to follow the lilting voice further into the castle. As he walked across the bridge, a mighty wind came blowing out of nowhere. He heard the howls of the wild wolves in the forest. Thinking it was a warning, the hair on the back of his neck stood up and a chill went straight down his spine. Shane threw all caution to the winds. He stepped forward courageously and entered into the main hall. He stopped to listen for he thought he heard a male voice with a thick brogue singing these words; “Ah Shane me lad which three wishes will you choose, thinking wisely for there is no going back and no returns once the contract is sealed.”

He asked in a loud booming voice who was speaking. “It is I, your personal leprechaun. Me name is McNally. My lad, you have entered the magic kingdom of Fairy Land and we are here to grant you three wishes for payment of a good deed your dear old mother did for us, many centuries ago. Think long and hard but give us an answer before the witching hour for time is short.”

Shane knew he was about to transform into a creature. He loved the mortals especially their beautiful women. He was lonely and desired a fair maiden. The clock hands were loud as they tick-tocked and he watched as a mouse ran up the clock. He heard a noise and turned towards it, at the castle’s entrance – there it was; he’d never seen one before. It was a big ferocious red-headed dragon, and straddling its long neck was an elf who controlled it by his hands. The dragon turned his head, then blew fire that flew across the moat and burnt the grass, flower and trees.

Before hopping down from the dragon, the elf laughed, saying that the dragon had eaten too much and now he had heart burn. The elf ran over to a long table and fetched a bucket of liquid for the dragon to drink. “There my sweet, all better now.” He patted the dragon’s head as if he were petting his own dog. The elf asked the red-haired man what was he staring at, but before Shane could reply, the elf humphed and went on his merry way.

Shane heard a melodic voice; a girl’s voice singing a song. He looked towards the sound and behold he laid his emerald eyes upon the most beautiful fairy he’d ever seen. She had red hair like him; long and wild and her eyes were of the colors of a rainbow. He was astonished as he watched the different auras of colors sparkle in her pupils. Her lips were so pouty and looked delicious enough to eat. He was immediately taken with her and wanted to know her better. He reached up and she glided like a pretty hummingbird right into his hand.

He asked her name and then could not help but say, “Do you believe in love at first sight for my heart is racing pitter patter a thousand beats. You are the loveliest creature I have ever seen.” She blushed, then turned and fluttered her wings to tickle his nose.

The clock struck the witching hour and Shane quickly declared his three wishes: one, was to remain in this magical land and become half creature and half human so that he could live in two realms. In other words, be a creature for his new lady and a human to protect his adopted mother. Two, the fairy should fall in love with him and the third wish, that she would desire to be his maiden for eternity.

So my friend that is why in the fairy realm lives a red-haired man who, for no clear reason, has a liking for the mortal race. He warns a young woman to refuse the fairy wine or leads the spell-drugged young man out of the fairy fort. Whenever someone sneezes at a party, he says the necessary ‘God bless you’ to prevent abduction. More mortals would have been taken to, and fewer returned from, fairyland without the intervention of this kind, red-haired fairy man.