Originalty and an interesting premise are important to Chris in his work. “Class Action came from one thought: what would happen if there was a technology that could see into the brain and extract everything, which made it impossible for suspects to lie under oath? The Second Internet Café came from: wouldn’t it be cool if there was a place where scientists knew where every single alternative reality was, and sent special researchers to go and investigate them?”Ideas like these and the others he has for future stories are the motivation for his writing, rather than any burning desire to be a writer.  “This, it seems to me, is the trick of being a storyteller: to come up with an original and entertaining idea that still has enough familiar elements to appeal.”

As is the case for most of us, Chris finds marketing his work to be the real thorn on the rose. “I want to write stories, and I don’t like losing time and wasting effort on marketing. I really went for it when I published The Dimension Researcher last September and lost five months of writing time as I got more and more frustrated because no matter how much I interacted with people on Twitter and Facebook and Goodreads, and guest blogged and gave away free copies in competitions, my books didn’t sell.”

He confesses that at times, it made him feel a fraud because his interaction with other people on these platforms was ultimately aimed at getting them interested in his books. He even shut down his social media accounts for a while.  “In any case, I don’t do blatant selling of my books anymore because I don’t care how many copies I sell because I can’t afford to care because I’ll go mad and besides I only really want to write stories. Yes, it depresses the hell out of me that I can’t get more readers, but I’m not going to give my books away for free because I put too much sheer bloody hard work into them, and I don’t think even giving them away would make that much difference. My books are out there, and they’ll just have to look after themselves: I’m busy.”

Chris says he gave up actively trying to recruit new readers. He says those who’ve been kind enough to write reviews have really become friends over the last few months.  If someone contacts him, he says he always responds as soon as he can, but seldom initiates contact himself. He says Indies Unlimited is a prime example. “I’ve been enjoying your site for some months, but I would never have submitted anything off my own back. But once Kat asked for a guest post and then this feature, I was only too happy to oblige and make the time for you.”

One of the changes Chris has made in the way of making more time to write is to switch to video blogging.”Although they’re a little nerve-wracking to record, they’re easy to script and only take a few minutes. While they’re converting and uploading, I can write fiction (instead of losing two or three hours writing a blog post).” Hmmm…

His feeling about the indie author movement reflects there is a way yet to go. He says indie authors need to get it together or face the prospect that the whole experiment will end awash in mediocrity. “It’s not just about typographical errors; too many read like first drafts, and I was speechless that people could publish this stuff and take other people’s money for it and still sleep at night. Apart from IU and the writers who I’ve read and respect, I have almost no interaction with other members of the Indie community. Some of the readers who bought and reviewed my books are also writers, and I’ve been happy to beta-read their stories, which on the whole have been good. One of the reasons I keep going back to IU is that you know what you’re doing when it comes to writing.”

Chris feels it is not unreasonable to expect that indie authors have a reasonable command of language. “English is our raw material, and every Indie absolutely MUST learn how to use it effectively. We don’t have the advantages of the mainstreams in this regard: Dan Brown either can or cannot write a coherent sentence, but it doesn’t matter because his publisher has got people to fix any mistakes. Indies don’t have that.” 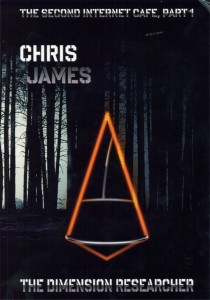 Chris James’ book, The Second Internet Café, Part1: The Dimension researcher, is available from Amazon US and Amazon UK.
Lucas Hunter has the best job in the universe: exploring and investigating alternative realities. But from the first trip he realises something is wrong. A strange American is chasing Lucas across the continuum; from Soviet Warsaw in 1944, to Muslim-dominated Europe in 1911, and on to Nazi-controlled England in 1967. Lucas soon understands that his superiors have betrayed him, and the world is on the brink of the first trans-dimensional war.