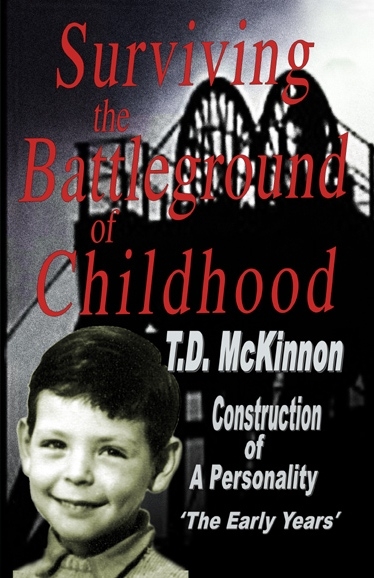 Today we have a sneak peek from author T.D. McKinnon’s  book, Surviving the Battleground of Childhood.

This is the true story of the first fifteen years of a boy’s life – growing up in the coal mining communities of Scotland and England in the 1950s and 60s and how he survives the adversities of that battleground.

Enduring the interminable beatings and psychological tribulations at home and facing the predators, antagonists and bullies in his immediate environment; will his inner courage, determination and indomitable sense of adventure carry him through? Surviving near death experiences, and in spite of all adversities, will Thomas reach young adulthood, and still keep the balance of his mind?

Surviving the Battleground of Childhood is available at Amazon.com, Amazon UK, Smashwords, Barnes & Noble and other major online retailers.

And now, from Surviving the Battleground of Childhood…

I would have been barely four years old, living in Kirkintilloch, Scotland. A rather skinny child for my age, I must have struck a pathetic figure: after an earlier fall I’d been crying and rubbing my eyes with my dirty hands, and my elbows, badly grazed and sore from the fall, were still sticky with half congealed blood.

Memory Point: I’m standing in a quandary, in the middle of the front yard, with my father looking out of the window behind me, and the two jeering bullies out on the footpath. Well, there isn’t really any big choice to make; I’m frightened of the bullies, but at least I stand a chance against them, even if it is a slim one.

I stood in the front yard for what seemed to be an eternity, hoping the ground would open up and swallow me. Suddenly my eyes were drawn to a piece of broken fence paling at my feet; I had been using it as a sword that very morning. Running towards the gate I swooped up my trusty sword, and the bullies out on the footpath lost valuable seconds standing open mouthed as I, their tormented victim, attacked with a sudden, vicious vengeance. Chasing them down the street I smashed my sword over Georgie’s head, the rough broken wood gashing quite deeply, and he squealed like a stuck pig. Then swinging my sword across the back of Hamish’s legs he immediately plummeted face first into the concrete path, loosing his front teeth.

Surprised at my ability to turn the tide of events, feeling both elated and scared, I made my way quickly home.

“You bloody wee lunatic!” yelled my father furiously, meeting me at the door. Instinctively, I put my hands up in a vain attempt to fend off the blows that always followed the verbal assault. Grabbing both arms he hauled me into the house, and in one swift movement he stripped my pants off and proceeded to whack, endlessly, into my bare bottom.

“Please…Daddy! Please!…Don’t…I promise I’ll be good… P-l-e-a-s-e!!…” I vainly attempted to twist and squirm out of the path of that hard, callused hand as it tore into the soft skin of my buttocks and legs, and wherever else he happened to connect with in his rage.

“I’ll knock the devil out of you… you wee lunatic… picking up a stick… I’ll teach you!” and ignoring my pleas he continued to lay into me.

At some point I could no longer breathe, and only then did the beating stop. “Stop that!” he yelled, and I tried to inhale, but couldn’t. I was becoming light-headed and there were black spots in front of my eyes: I was passing out. “Come on Thomas!… Breathe,” I could barely hear him now. He slapped my back and suddenly my lungs opened and I could breathe again.