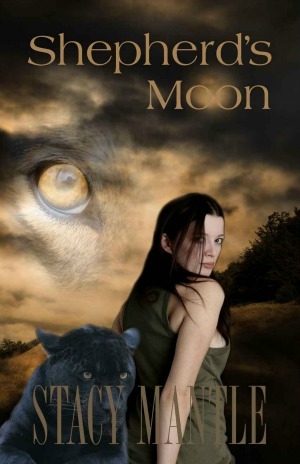 Today we have a sneak peek of Stacy Mantle’s  book, Shepherd’s Moon. 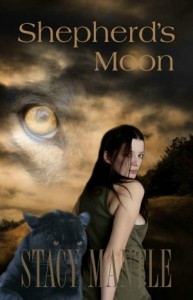 It’s taken twelve years for Alex to earn the official title of Shepherd but she’s now mostly trained, fairly effective, and the first female in over two centuries to hold the position as protector of animals. All animals…

Everything changes when a chance encounter with a genetically modified Shifter leaves Alex shaken and initiates a quest to locate its maker. In a desperate bid to save her pack, Alex must infiltrate the Parallax Corporation – an international organization with their hands in everything from biomedical engineering to publishing. They have now expanded their efforts to include terrorism and are attempting to breed the perfect weapon.

Despite years of training and enough money from her live-in pack of misfits to finance a small country, Alex finds herself woefully unprepared to tackle the new threat. To make matters worse, Alex must work with a mysterious man who’s been trying to kill her since the day they met. Together with her pack, Alex must learn how to stop the biological cloning and find those responsible for the plan before it really does become a global threat.

Shepherd’s Moon is available from Amazon in print or Kindle format and from Barnes & Noble.

And now, from Shepherd’s Moon…

“Hey, Warrior Princess!” he called out, stalking over the dead grass of the yard towards me. An air of disapproval hit me like a physical blow and I took a step back without even realizing it. A soft Georgia accent softened his words — made them seem almost cordial. “Who the hell do you think you are stomping all over my scene?”

“Alexandra Wilde,” I answered. “And it’s not your scene.”

He stepped closer and looked me up and down.

“Well, if it ain’t the Were Whisperer — as I live and breathe.” He shook his head, softly clicking his tongue. “I heard you might be around tonight.”

His words surprised me and I glanced around to see who had heard, but no one appeared to notice. What the hell did this guy know about me? I was torn between fear and anger, but before I could decide which emotion was more powerful, his gaze swept over the man at my feet and a smile tugged at the corner of his mouth.

When he noticed I was still handcuffed, he shook his head. “Someone uncuff her!” As the officer removed the bands that held me, I took the moment to regroup and was somehow able to feign indifference to the man. Inside, I was shaking. But, damned if I’d let him know it.

I rubbed my wrists as the stranger summarily dismissed the officers with a single lift of his head. Eyeing the badge clipped to his jeans, I accepted my gun from the cop who had cuffed me and placed it in the front of my jeans, watching the officers disappear into the night. Cars backed out of the alley and in only a moment, we were alone.

“Well, Shepherd — you’re out of your jurisdiction. My men had very clear instructions to keep everyone out.”

“Then it appears you have some management issues,” I answered calmly.

He grinned and I couldn’t help but think this guy didn’t take much of anything seriously. “Well, now that I’m here, I can remedy that problem. At the risk of appearing rude, I’m afraid I’m going to have to ask you to remove yourself from my scene.”

Anger washed over me and I met his stance with a formidable glare as I fought to keep my voice steady. “You lost control of your scene quite awhile ago from the looks of it. But, hey — welcome to the party. Better late than never.”

The comment would strike a nerve with any of my pack members, but he just grinned and lifted his shoulders in a good-natured shrug. I couldn’t help but notice the difference in how men react to a situation. The thought of losing control of anything would send both Billy and Brock into a downward spiral.

But this man wasn’t a coyote or a wolf. In fact, he wasn’t any type of Were I’d ever met. Whoever, or whatever, this guy was — he was powerful. Energy surged through the night with every step he took.

So if he wasn’t Were or vampire and he wasn’t exactly human, or at least not enough to be classified as one on the food chain — what the hell does that leave?