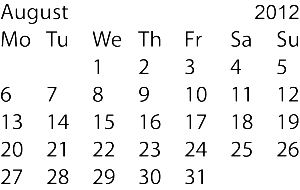 Yes, I totally stole this post title from a Counting Crows album. I’m an old guy, so sue me. No wait, please don’t.

All last month, my Ed’s Casual Friday column here at IU consisted of a four-part look at one-star reviews on a hundred novels regarded as the “best” literature has to offer. The astute among you may have noticed that doing those four articles allowed me to write a full month of posts all at once, and then basically not show up for the rest of July. My lack of presence was not exclusive to IU, but to all the “social media outlets” around which us writerly types tend to congregate. Facebook pages, boards, groups, sites, lists, on and on, ad nauseum. I largely stayed off line for all of July, and I didn’t really do any writing, either. After finishing the fourth book in a series and releasing it at the end of June, before launching into book five I took a couple Mental Health days that turned into a week, and then the full month.

Two things I learned. First, I really did miss the writing, and even while I was about-and-about in the world some days, I was still writing, though nothing happened to get down on paper. I’ve thought my way through a good portion of what is (perforce) going to be a rather intricate novel, and I am anxious to get going now on chapter one. That’s what August is for, and I’m good to go.

Second, being absent from all writerly outlets made, for me, absolutely no difference sales-wise. Sales, such as they are, continued at what is their typical rate for a month in which I don’t run a free giveaway or pay a reputable site like E-reader News Today or Pixel of Ink to run an ad. So far, doing either of those things for the first book in a series has been good for a big sales boost on the sequels. Hanging around writers’ groups is, near as I can tell, of doubtful utility.

Don’t get me wrong, it’s a lot of fun to hang out in such groups. My tribe is the tribe of the finger-callused typers and the self-distracted introverts. Those who are always up to something in the back of their minds, lost in their own worlds even while they are pretending to be interested in the world around them. We can be a fun bunch, as at least half of us are half as funny as we think we are about half the time. But we are also a huge, gaping time-suck for each other.

Mind you, writers’ groups can also be total life-savers, particularly when you are just starting out. I have been at this “Indie” thing now for about a year and a half, and for the first several months being in lots of groups on fb and elsewhere was critical. It allowed me to get a sense of the rapidly evolving lay-of-the-land in Indie World, meet a lot of great people, find out what sort of stuff works, and what kinds of things don’t. Though the main thing I learned was that everything works differently for everybody. No two authors have the same experience with any aspect of “promotion,” and you sort of need to try everything until something seems to work for you.

At some point however, being in so many various groups, and spending so much time talking to fellow writers as opposed to, you know, readers, can be a crippling time drain. After a while, every conversation in every group of writers is going to seem like a conversation you’ve had twenty times before. Besides that, as is true of any group consisting of more than one person, eventually personality conflicts are going to arise, drama will unfold, feelings will get hurt and criminations and recriminations will fly. Even if you stay well out of it, just the fact that it is going on is a huge distraction, like slowing down to watch a car wreck. When they are functioning at their best, writers’ groups can be a source of warm support, excellent advice, and friendship. But even then, you will have to pick your way through “Buy My Book!” ads, “I got an awful review!” wails, and “Why am I not richer than JK Rowling?” scree fields to find it.

Thus and ergo: August and Everything After. While I am not withdrawing from all my friendly neighborhood writers groups, I am going to continue to scale my activities within them way, way back. I’m doing this not because I don’t enjoy them, but more because I enjoy them too much, and only too well. Instead, I will be concentrating more on the one activity that I know can sell more books, and that is of course having more books out there to sell. Write more, everything else less.

Which brings me to my weekly column here at Indies Unlimited, Ed’s Casual Friday, which I have been writing now every week since the sixth day of 2012. To tell you the truth, I have been vacillating wildly whether or not to keep at it, even as I am writing this post. It is still fun, and I like to think that people find it enjoyable, and maybe even helpful on occasion. But man, does it take time. Having those four July columns ready to post was like having an extra day in each week to do something else. And honestly, after writing 30+ of these, I’m pretty much out of stuff to say that hasn’t been said multiple times by either me, or another of what I think is now a full battalion of contributors to this site. 😉

Yet, I do like having this space here for those times when I feel like I have something to offer, or even just feel like saying something. So what I think I am going to do is this: I’ll keep posting Ed’s Casual Friday columns each week when I think I might have something useful (or at least amusing) to offer, but each week if it feels like I am just forcing it, I’m not going to inflict a post on anybody just for the sake of filling space. I just don’t have the time, and as we are pretty much all writers here, I daresay you guys probably don’t have it, either. Not when we all have so many other words we should be writing.

Thanks as always for reading. Now go get back to work. 😉

13 thoughts on “Ed’s Casual Friday: August and Everything After…”