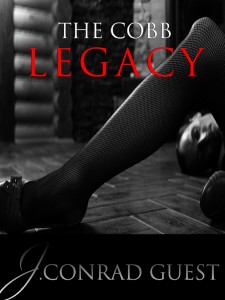 Cagney Nowak is writing a novel around the 1905 shooting death of baseball legend Ty Cobb’s father, William, by his mother. Town gossip had it that Amanda Cobb was having an affair and that William, returned early from a business trip to catch her with her lover. The questions were never raised as to why she had locked her second story window on a hot August night, or why she’d shot twice. When Cagney begins to relive the night of the shooting in his dreams, more than a century later and in the guise of Amanda Cobb, he is led to discover his father’s deepest secret.

The Cobb Legacy is available through Amazon.com, Amazon UK, Barnes & Noble, and other online stores.

Here is an excerpt from The Cobb Legacy:

Amanda had just finished tightening the belt on her robe when she heard a creak from the balcony outside the second story bedroom window. Her oldest boy, Tyrus, was playing baseball in Augusta, while the younger two—a daughter and another son—were at friends’ houses.

She quickly stepped, barefoot, to the bed, squatted, and felt under the bed for the double-barreled shotgun her husband kept for protection; William was out of town on business.

Standing, Amanda strained to cock the first barrel on the heavy shotgun. Struggling to aim the unwieldy twin at the window, she tilted her head to listen, over the rush of running water from the bathroom, for sounds from the balcony. She heard a faint scratching at the window and was grateful that she’d had the foresight to lock the windows.

Amanda made her way stealthily to the window to open the shade. Seeing nothing, she moved to the second window, on the other side of the chimney, and opened the second shade.

Hearing the scratching again, from the first window, she crept around the chimney to find the round, white face of William staring back at her through the glass.

Amanda gasped in surprise and backpedaled, until she felt the bed against the backs of her legs; the water suddenly stopped its mad rush and silence, as it often did, filled the void between Amanda and William.

William appeared startled by the sight of his wife armed with the shotgun; but then Amanda watched her husband’s gaze move from the twin barrels aimed at his midsection to a place just over her right shoulder. A moment later his dark eyes narrowed on his wife’s face.

The pane of glass separating them, save for its transparency, seemed, to Amanda, a sort of metaphor for what their marriage had become. Meeting her husband’s angry gaze bravely, she felt a corner of her mouth twitch and rise slightly.

Amanda savored, for a moment, the transition from stern cruelty that normally resided on her husband’s face to fear before she pulled the first trigger. Recoiling from the blast, she heard the shattering of glass and saw a gaping red hole appear in William’s abdomen.

William stumbled backward, landing hard against the balcony railing, and stutter-stepped forward again with a groan, framed within the remnants of the window. The pistol with which he’d armed himself for the occasion clattered to the balcony.

Amanda cocked the second barrel and stepped forward before she pulled the second trigger, and the top of William’s head exploded.