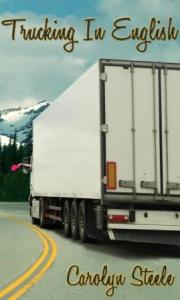 Today we have a sneak peek of author Carolyn Steele’s new travelogue: Trucking in English.

Trucking in English is available through Amazon.com, Amazon UK, and Smashwords.

Here is an excerpt from Trucking in English…

The venture had been planned with military precision. Arrive late afternoon, rooms booked in a nearby hotel, supper at Applebee’s and meet in the vestibule at 7.40 sharp in the morning for the bus to skid school. There were dire warnings not to drink too much. Anyone appearing dozy, dopey, sleepy, hung-over or smelling of beer would not be allowed to participate. I will refrain from the obvious gags about new names for dwarfs here and deposit you with us in a chilly, prefabricated classroom in the middle of a large expanse of wet concrete miles from anywhere and dotted with orange traffic cones.

Two distinctive groups of people huddled at opposite ends of the class. Nine were champing at the bit to get out there and skid things, the other six were displaying resentful and aggravated body language. How could anyone not want to be here? This was going to be Fun.

Two large, loud, baseball-capped and bewhiskered personages inhabited all the rest of the available space. They introduced themselves as our instructors for the day and shouted at us for having started on the registration forms laid out on our desks without waiting for instructions as to how to fill them in. The forms weren’t complicated but the tone for the day was set…‘do exactly what we tell you, when we tell you, and nobody will get hurt.’

Next to be held aloft equally gleefully was the huge pile of pre-printed certificates for participation in the course which had been withheld from previous attendees for various reasons such as being thrown off the pan, refusing to participate, losing their lunch and passing out.

The enthusiastic rookies quietened down a bit. Some lost a little colour. The resentful huddle glowered. The large whiskery chaps grinned, they clearly loved their work. It was their job to frighten us before they taught us how to survive and they did it well.

Light dawned as to the provenance of the glowering huddle. All from the same firm, they were seasoned truckers who had transgressed in some way and were being compulsorily retrained. Hopefully they would have fun too once the action kicked in.