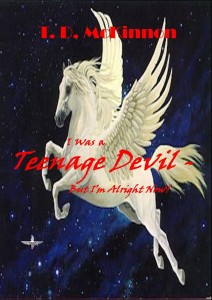 Today we have a sneak peek from author T.D. McKinnon’s book, I Was a Teenage Devil – But I’m Alright Now!

This is the continuing saga of Thomas who, after ‘Surviving the Battleground of Childhood’, attempting to escape his coal mining community roots, joins the British Army at just fifteen years of age. He continues to grow up through the second half of his teens, steeped in the elitism of the infamous ‘Red Devils’.

Searching for emotional validity, his trysts and affairs of the heart vary from fleeting, to sordid, to totally absorbing. On one occasion, when an old devil comes a calling (a sexual predator, disguised as a senior, RAF officer), Thomas decides to commit the ultimate sin!

I Was a Teenage Devil – But I’m Alright Now! is available at Amazon.com, Amazon UK, Smashwords and other major online retailers.

Here is an excerpt from I Was a Teenage Devil – But I’m Alright Now!…

He was still driving, and I was still squashing myself flat against the door saying nothing: I figured that every hundred yards we covered was a hundred yards less for me to walk in that damn storm.

Confused, frightened, angry…. ‘What should I do?… Tell him to stop the car, and then just get out and walk?… Or, just reach over and slam him in the jaw?… Or, play along with him and get him to pull off the main road, drag him out of the vehicle and kick him to death; then leave his body to rot under a hedgerow?… Now, that was sounding more appealing by the second.’

“I’m going to take your silence as affirmative,” he said, and he suddenly turned off the main road into a small lane.

“Stop the car!” I said, suddenly panic-stricken: a host of butterflies took flight in my stomach (not a familiar feeling these days) and I began to shake uncontrollably.

“Oh, I’m going to…” he answered, smiling smugly while peering out into the stormy night, obviously looking for somewhere suitable, “Soon.”

The fury rising from within almost overwhelmed me and it was with great effort that I resisted the impulse to attack this gloating, arrogant abuser right there and then. However, suddenly I felt very calm, the butterflies disappeared, the shaking stopped. I knew exactly what I was going to do.

Without warning, he pulled abruptly left and off the road, stopping in front of a five-bar-gate. Before he had chance to switch the engine off I leapt from the vehicle and ran around to open the gate. Driving into the field, he pulled right and along the hedgerow ten yards or so before stopping the engine and switching the lights off.

I experienced a cold, hard, detached feeling as I walked, unhurriedly, through the pelting rain. Opening the door I hoisted myself back into the passenger seat.

“I’m awfully pleased you’re getting into the spirit of things… Now then… let’s not waste any time,” he said, reaching over and unbuttoning the fly of my combat pants, and then leaning over, “That’s the ticket… my, my… that’s lovely…”

Memory Point: He doesn’t flinch as I take a handful of his hair and grip his jaw, and he doesn’t know what hit him as I smash his face against the metal dashboard with such a force I suspect I’ve caved his head in, and without pause smash it against the dashboard a second time. Pushing the door open I jump from the vehicle, keeping hold of his hair I drag the hapless Wing Commander with me. His exit is suddenly halted as his foot jams somewhere. His head still firmly in my grasp, throwing my weight backwards I remorselessly wrench him out. Dragging him four or five yards, shaking him as a dog would a rabbit, I hurl his head at the ground where he lies motionless…

A flash of lightning eerily, illuminates the scene and I scream at his prone, unconscious form. “Now I’m going to kick you to death!”