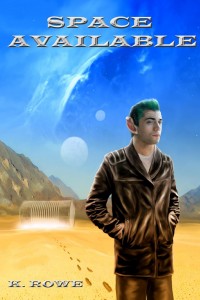 Today we have a sneak peek from Space Available, the science fiction action-adventure novel by author K. Rowe.

Space Available is the third installment of Dar’s Adventures in Space series. Join Dar and Parnela as they traverse not only their galaxy, but make a visit to the Milky Way Galaxy where they receive a less than a warm welcome. Dar must rely on the good nature of one of his captors to free them. Once freed, they make a bee-line back to the Ontarrin Galaxy and the re-born planet of Satiris that they hope to call home someday.

Space Available is available from Amazon US, Smashwords, and Amazon UK.

Here is an excerpt from Space Available…

“Robert, this is stupid,” Dar said as he worked a hose loose in the old alien shuttle. “I told you I can’t make this thing work.”

“I know that, and you know that, but the general doesn’t. I had to tell him you could fix this ship and make it fly so humans could do battle with the Soothians.”

“This ship fight two Soothian cruisers? Preposterous! Why did you tell him that?”

“Because I needed a reason to ensure your continued living and breathing on this planet.” Robert nudged him. “Besides, I’ve never figured it out, but this ship acts like a big sound absorber.”

“This whole facility is bugged with sound recording devices. Anything you say will be picked up. But, in this ship, the sound is dampened and those ‘ears’ can’t hear.”

“Toridium seems to have that property.” Dar reached over and knocked on a wall.

“Besides, I got busted for taking you outside the other day. The general feared you might sprout wings and fly off.”

“I know, I know. Please, bear with me; I’m working on a plan.” He reached in his pocket and pulled out a small map. “Do you even remember where your shuttle is?”

Dar leaned over and looked at the map. “I don’t even know where we are.”

“Here, just outside of Cheyenne.” Robert drew his finger up an interstate. “This is where they picked you up, a couple miles south of Glendo.”

“That was where we bought food.”

“Yeah, and the store owner called the sheriff. Something about you paying in gold tipped him off.”

“I had no earthling currency.”

Robert chuckled. “What? No ATMs in your galaxy?”

“On earth, it’s a machine where you can take out money.”

“That might have been what I saw on TV. A machine that gives you drig? Curious.”

“I guess your galaxy is a bit behind on that technology.”

“We may have no need for a machine like that.” He went to loosen another hose. As he turned the wrench, the hose popped loose and sprayed him in the face with dark green goo. “That wasn’t good.”

Robert took one look at Dar and fell to his knees laughing hysterically. Soon, Dar was laughing as he tried to find a towel to wipe his face. After a bit of searching, he found one and cleaned up the best he could. “Robert, I’m in no way fixing this ship; if anything, I’m making it worse.”

Dar reconnected the hose, tightening it down firmly. “If I can find my shuttle again.”

“Yes, right.” Robert stood next to Dar with the map. “Where do you think you came out on the road?”

He studied the map. “The princess and I found the road a few miles above the town. Before that, we were walking through forest that turned to grassland.”