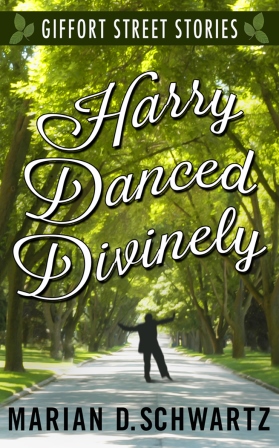 There were some things Lillian Levinson couldn’t say, even to herself.

In the collected Giffort Street stories, you’ll enter seven gracious homes on an elm-lined street. You’ll meet the Stan and Adele Heussler, whose marriage begins to fall apart after they buy a magnificent antique bedroom set; Dale Kenway, who can’t tell anyone the reason he doesn’t want to be called a hero; Saul Penner, who realizes that the first neighbor he meets after he moves in is a bigot; the Danahy family, who are battling each other over the Vietnam War; and Bernice and Arnold Whittaker, who are unaware of how their trusted nanny is shaping their daughters’ lives. In the title story, Harry Danced Divinely, the lack of a tea bag makes an elderly Jewish woman decide to teach her spoiled adult son a shocking public lesson.

The stories Harry Danced Divinely, An Authentic Hero, Neighbors, and The Queen Anne Bedroom Set are exclusive to this book. A Perfect Nanny and the novella War Zone, which are available as singles, are also included.

Marian, how did you come up with the title for your book? Does it have any special meaning?
The title, “Harry Danced Divinely,” comes from a remark a character made about the late Harry Levinson. He was flashy and a marvelous dancer. But Harry unwittingly put his widow in a position in which she had to struggle because of his need to control, even beyond his death.

Who was your favorite character and why?
Dale Kenway is a naïve, decent young man who is unexpectedly drafted to fight in a war he knows nothing about. When he comes home he is treated as a hero, even though he protests that he isn’t. Dale feels as though he has lost his place in the world.

Does your book have any underlying theme, message, or moral?
As a child, I believed all the families on the block were as happy as ours. But when I created houses and characters born in my imagination, I discovered that this was not the case. Perhaps it’s no accident that the stories are tales of loss of innocence, some of the innocence mine.

What would/could a reader or reviewer say about this book that shows they “get” you as an author?
Marian D. Schwartz has captured the years between the Korean War, the first American war that we expected to win and ultimately lost, and the Vietnam War, the war that tore us apart as a nation. In her characters’ stories, she chronicles America’s loss of innocence.

Give us an excerpted quote from your favorite review of this book:
“I loved the parallel between the great elms’ coming down and the life-altering events experienced by the residents. I also enjoyed the way the stories are intertwined.” Linda Lange

Where can people learn more about your writing?
mariandschwartz.com