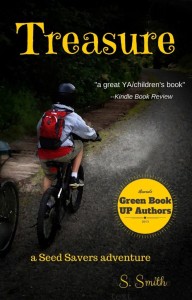 It’s 2077. There’s no apocalypse, but some things are different. Things like the weather, the internet, and food. In twelve-year-old Clare’s world, blueberry is just a flavor and apples are found only in fairy tales.

Then one day Clare meets an old woman who teaches her about seeds and real food. The woman (Ana) tempts Clare with the notion that food exists other than the square, processed, packaged food she has always known. With Ana’s guidance, Clare and her friends learn about seeds and gardening despite suspicions that such actions are illegal.

When  the authorities discover the children’s forbidden tomato plant and arrest their mother, Clare and her brother flee. Clare has heard of a place called “The Garden State,” and with their bikes, a little money, and backpacks, the children begin a lonely cross-country journey that tests them both physically and spiritually. Will they succeed in their quest to find a place of food freedom?  And can they, only children, help change the world?

“Move only at night,” he said. “Try to find good places to rest during the day. If you must travel while it’s light, make sure it is in sparsely populated places. Wear your helmets and keep your heads low.”

He taught them to read the night sky and how to find friends.

“Years ago, when gardeners had to go underground, so to speak, they developed signals still used today. When you looked up at my balcony, what was the first thing you noticed?”

“Yes, the pansies. I wish you could have seen the lupines. Lupines were really the chosen flowers for our code, but alas, they finish blooming early in the summer around here. So we keep anything purple alive that we can,” he said smiling.

“Well, for one thing, everybody has roses,” Gruff said winking. “The story is this: about a hundred years ago, a mountain in Washington state blew its top. Forests were blown away. The land was devastated. It’s said that the first plants to emerge from the ash-covered land were wild lupines. They’re tenacious—like us. We, the Seed Savers, will come back someday, too.”

“So, if we see someplace with a lot of purple flowers, they might be friends?”

“Right,” said Gruff. “But there’s more. Obviously if lupines grow wild or if someone just likes purple, that wouldn’t be enough to go knocking on their door and ask if they were Seed Savers. The next sign is a symbol of a circle within a circle.”

“A circle within a circle?”

Gruff grabbed a pen and paper. “Like this,” he said, drawing. He drew a circle as best he could, and then right outside of it, a second circle, enclosing the first. 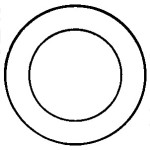 “It’s an ancient sacred symbol of mother earth, or earth goddess, and the fertility and fruitfulness she embodies. If you go outside my door and take a good look, you’ll find I’ve painted a small one down near the bottom,” he said. “Anyway, if you find the purple flowers and the symbol, you can pretty much figure they are Seed Savers. But just to be sure, there is one last test. Knock at the door. If someone opens it, first ask, ‘Are you the resident here?’ If they say yes, then ask, ‘Do you know where Amber Jenson lives?’”

“Who is Amber Jenson?” asked Clare.

“She’s not anyone. Well, I’m sure she is someone, but the name is random. Initially the Network wanted to use the name of an early worker in the movement, but it was deemed too dangerous, in case an enemy overhear and recognize the name. We’ve never had a problem so far with these three signs. And GRIM hasn’t figured out any of our means of communication. Be very careful with the knowledge.”

Gruff started making the children sleep during the day and stay up at night. It would be easier, he told them, if they were used to a nocturnal lifestyle before departure.