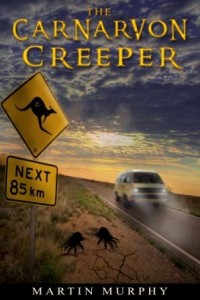 For decades, during each December, people have been disappearing from towns across the west coast of Australia. The number of missing is mounting, the bodies never recovered, presumed lost amid the vast, unforgiving landscape. A grieving traveller will be dragged into the mystery in the remote outback before he comes face-to-face with a nightmare beyond his worst imaginings…

The Carnarvon Creeper is available on Amazon.com and Amazon UK.

Exclusive excerpt from The Carnarvon Creeper by Martin Murphy

I began to walk, only it was more of a stagger, my head pounding with each delicate step over the terrain. I cursed myself for not setting off when I had woken earlier, for leaving myself in this position, wandering around weak and feverish. I may well have survived the confrontation of my life, only to burn to a cinder out in the scorching desert.  As if to intensify my misery, the sun suddenly seemed to increase its rate of ascent in the sky. The heat, inside my body and out, went up another level.

Turning briefly to eye the canyon I had left behind, I saw a number of prominent ridges protruding from the slope, like a series of Neanderthal brows. I looked below one of them, at the crevice I had hidden inside; it was as if a giant had taken a chisel up there and hammered a gaping hole into the rock. The notion of turning back occurred to me, of taking shelter, waiting for the worst of my fever to pass. But I dismissed the idea, thinking it wise to push on while still in possession of whatever strength remained – and began to shuffle on towards the road in the distance.

I spent a while mulling over what it would be like to drink a glass of lemonade, how beautiful, sweet and refreshing, and wished to God I had enjoyed it more when I had the chance. I tried to capture the sensation of cold water touching my lips and thought I heard the chink of ice; the urge to quench my thirst was so overwhelming, so painful, nothing else mattered. I contemplated whether it would be safe to drink my own urine, and then realized I had not emptied my bladder since yesterday.

I remember lifting my head again – saw how the blazing sun appeared to fill the sky in the east, the road ahead disappearing in its brilliance as the sweat poured off my whole body.

Another idea came to me: a sudden conviction that the monster which had claimed Cronje would be waiting on the road ahead. It was toying with me, watching me suffer a while longer in the punishing conditions before claiming me. Wasn’t it misery, after all, which tasted sweetest?

They appeared on the periphery of my vision initially, what appeared to be animals, scurrying beside me as I walked. At first they would disappear when I swung my head to look at them, but the more they drew my attention the more convinced of their presence I became. Soon I was watching monkeys trotting on all fours up ahead and at my side: covered in black fur, long-limbed with curling tails, whose tips curled around cups of fresh water, their contents spilling over the ground as they scurried along. Spider monkeys, I recalled from memory – out of the rainforest. I reached out to them a couple of times but they would shriek and pull away. Snakes then began to tunnel their way up through the dirt to glide along at my feet. As if in contrast, their leathery skin glistened in the sun as they wound their way across sand and stone: beautiful orange, with hoops of gentle yellow and black. In truth, they made me feel a smidgeon better, my little band of followers – gave me reason to believe I had company out there as I staggered on my way, bewildered at how rapidly my strength had given out.

I thought: I’m going to die, but I won’t be alone.