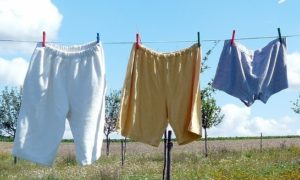 It makes sense that, with financial investments and underwear, you shouldn’t try to go through life with just one, right? This sort of logic is the direction I’ve taken with writing as well. Writing, for me, has never been about making the great American novel, or trying to be the best-selling novelist of all time. It’s been a means to an end. I like to create, and this particular craft suits me. If an opportunity comes my way, there’s very little chance I’ll say no. With that in mind, I don’t expect everyone to read this article without hesitation. After all, we all have different aspirations, and some of you out there are more driven towards specific goals. Still, you should hear me out.

Diversity in writing has a number of benefits. I don’t necessarily mean tackling different genres and styles, but that has its own merits as well. More to the point, I mean entirely different markets. Take a crack at copywriting, slogans, haiku, or comic books – anything that comes your way. Will you make money off this? Probably not. But, there’s more to it than that. Let me give you a couple of examples.

I worked briefly as a copywriter for an online company. It paid decently and got me through a difficult time, but what I really got from it was endurance. I’ve always been one to improvise in my writing, letting the characters drive the path of the story, but for no more than an hour, or two, at a time. With copywriting, I was writing for upwards of five to six hours a day, and it’s a different kind of writing. Copywriting is all about playing to the audience, working with deadlines, and keeping to a specific format. For me, books have always been about what makes me happy and that’s it. If I feel like tossing in a chapter about how my superhero(ish) protagonist has to take on Santa’s elves in a giant robot, all because the elves are ticked off Santa isn’t paying them royalties that he’s making off the world, I can. No, I am not making this up.

Comic script writing and comic lettering (word bubbles and action words) were entirely an accident for me. I’ve read comics throughout my life, but nowhere nearly as many as I did books. Around my second, or third book, the idea of seeing these stories in comic form had occurred to me, but it was never more than a silly concept that I tucked away for daydreaming. It wasn’t until I started going regularly to my local comic book store that the opportunity presented itself, and it was simply because I was friendly with the other regulars, who also happen to be artists and writers.

It started with this concept page I made on Facebook called Sketch Time Daily (STD) where I would take the daily warm-up sketches of my artist friends and effectively turn them into memes. It’s a silly page (and website) that garnered a fair amount of laughs, photo editing experience, and some new contacts that turned into the occasional paid gig. It also made me realize that my mind works for this media format. I’m a visual writer. I block out fight sequences in my living room, sometimes with the help of my overly amused wife. Comic scripts are nothing more than rough draft layouts of scenes with simple dialogue. The difficulty is learning to convey a short story in an even shorter format with as few words as possible. It’s a fantastic tool to have if you’re writing a character who speaks wisely, but very little.

Even if you set aside the knowledge and experience you get from going outside your comfort zone, there’s also the exposure. I know this is an almost taboo word these days, but if you do it correctly, there’s a lot more to gain than a little coin in your pocket. Lettering isn’t exactly a writing tool, but it does give me the ability to connect with artists on a level that I normally wouldn’t. I’m not coming to them, begging them to draw a script, and potentially paying them to do so – even a cheap artist is going to run you $30+ a page, and that’s probably black and white. Instead, they are coming to me and asking me to letter their comics, which turns into conversations, and giving writing pointers, and eventually into them hearing out some idea and going, “Heck yeah, let’s make that.” Exposure turns into cooperation that turns into personal collaborations and discounted book covers.

Fast forward a little more than a year, and all of a sudden I’m making a 100-page graphic novel, of my ideas, with three artists, and a colorist that will see its way to Kickstarter probably next year, and another random thing for me to sell at conventions. Will I make millions off this? No way, but my name is out there amongst people who normally would have never heard of me. People who will Google me, finding a plethora of varied content to sift through, and find something they enjoy. Cha ching!

5 thoughts on “Writing and Underwear: More Is Better”