Kickstarter is a crowdfunding site where one puts up a project, in my case a horror novel, sets a goal, chooses rewards for the backers of the project, and designs the look of the campaign page through a series of easy to figure out, fill in the blank, sections. That’s the easy part. The hard part is the frantic madness that is screaming across the internet landscape, “HEY, LOOK AT ME, I NEED YOUR MONEY AND I PROMISE TO GIVE YOU THINGS!”

Okay, what is the point of this Kickstarter project? In my case, I’m asking for help to pay for the editing and book cover art for my latest novel. Both people have been paid in some sense – I do a lot of trade – but I wanted to get them some in greenbacks. You know, to be fair and stuff.

First off, working up to a campaign is not as simple as it may sound. You need a product that people will want. I had Domitianus, a horror novel I wrote. Next, you’ll need to come up with a short blurb (under 135 characters), how you want to title the project (I went with the name of the book), and a decent description of the book. Sounds a little like a pitch, doesn’t it?

Below is a screen shot of the fees for Kickstarter. To keep it simple, or in case it’s too small to read, just go with 15% per backer. Backer gives you $10 for a reward tier? $1.50 gone. It’s technically 5% for total funds, and 3% + $.20 per pledge. So, a $10 pledge is really a dollar less (10%), but 15% is a safety net. After all, this isn’t your only expense. You still have packaging, shipping, and taxes to deal with. Not to mention production costs of the product. A 5% buffer will help to mitigate any muck ups. 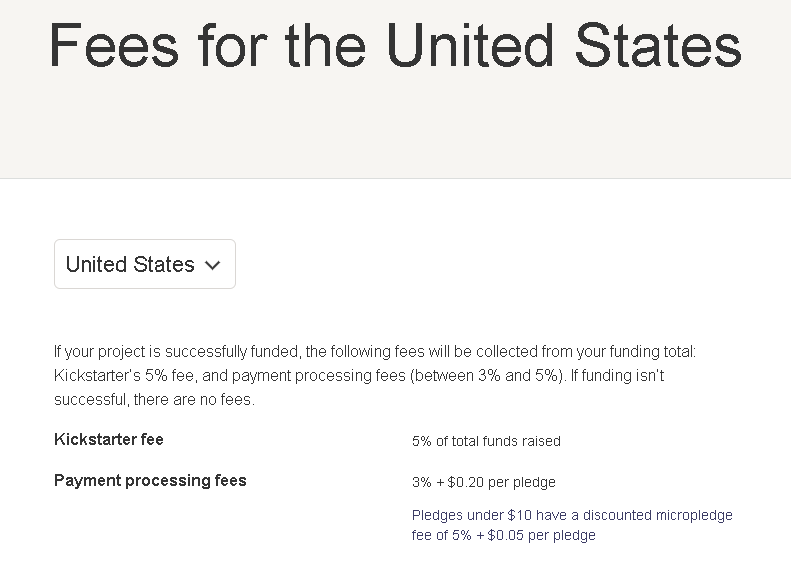 This is different from your actual goal, and this is can be tricky, especially if you aren’t friends with Excel. My goal for Domitianus is set to $1100 on Kickstarter. If the goal is reached, after shipping, packaging, product production, and fees, I should come away with $500. This is, of course, saying I don’t go over my goal, in which case I’ll walk away with more. If I don’t hit my goal, then I get nothing and the backers pay nothing – no one pays a dime until the target is reached. Knowing what your personal goal is will help dictate your Kickstarter goal, and that will help you to figure out your reward tiers.

I spent a lot of time looking into this, and the one tip I can offer from that is to keep your rewards simple, and few. Unless you are funding a movie, video game, or something HUGE, then you don’t need twenty reward tiers that escalate into the thousands of dollars. You also need to watch the price tag you put on them. My suggestion is to look at the other projects that resemble yours and really focus on what works and what doesn’t.

For me, I found that the failing, or failed Kickstarters had a few things in common, but not necessarily at the same time. This included: no video intro, huge target goals, bad rewards, too few rewards, or too many. I chose five reward tiers, but one of them is an “early bird” – I’ll explain that later. According to Kickstarter, the most chosen reward is at $25. Generally speaking, most book campaigns started their paperbacks at this level, and so did I, but at the early-bird level.

Your rewards can be entirely separate, or build upon each other. I chose the build-up path. $5 gets you an “image pack” which consists of the cover cropped in three different ways and at three different resolutions. The idea here is that if you wanted to support me, but weren’t really interested in the book itself, at least you would walk away with some nice desktop backgrounds.

The next tier is $10 and you get the image pack and the eBook. I assume, and so far so good, that people will go, “hey, it’s only $5 more for the eBook too”. After that is $25, which  gets you the paperback in addition to everything else. Remember, too, that this is a good time to offer exclusive items, if you can. The artist for Domitianus is signing and numbering a limited edition (ten, in this case) set of prints for the high end reward, at $50 – which still gives you everything else listed before. I’m also signing all the books and all that fun stuff people like.

If you have an existing series and you’re looking to fund, say, book #4, there’s no reason  you can’t offer a reward tier of all the books, or one that gives you select books – for the fans who have book 1 and 2, but need 3 and 4. What I do not recommend is silly things that make no sense for your demographic. An adult horror book should not be offering stickers as a reward. Yeah, you laugh now, but I saw someone doing that. A single sticker for their $5 tier, it didn’t even say how big the sticker was.

**To Be Continued… DUN DUN DUUUUUUN**