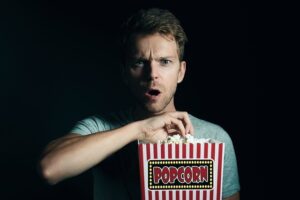 If you want to be on the cutting edge in popular writing these days, there is a new format quite a few writers are following that you might want to try. In essence, it copies the format of a Netflix finite series. This format is very popular in on-demand TV, so if the market in books hasn’t developed yet, it soon will. The storyline borrows from soap operas, TV series, and Ken Burns-style historical documentaries.

It’s All Based on Conflict

Whenever you have a story-within-a story, there are two conflicts that have to be balanced: the specific conflict for the section and the overall conflict for the whole work. In a normal TV or novel series, the conflict in each episode is the important one. There may be personality conflicts and overall problems, but each episode or book starts with a new conflict, works through it, and solves it at the end. The best example of this is the detective TV show. The head detective may have a running battle going on with the pathologist and the precinct may be in a neighbourhood that has social problems, but each episode has a specific perp who provides the structure by committing the crime to start the show and getting caught at the end. The episode can be enjoyed as a one-off.

A serialized novel goes the opposite extreme. Because the basic plot comes from a novel, there is one overarching conflict that will not be solved until the last episode in the series. Each episode should have its own small conflict with beginning, middle, and end, but all these conflicts are tied much closer to the main conflict, and their function is only to move that plot along. Serials are just too confusing unless you start at the beginning and read them in order. Serials, especially those with weaker writing, quite often just stop in the middle of some major bit of action with a “to be continued” message. Which basically means, “Now I’ve got you hooked so you buy the next book to see what happens next.” This is not a way to endear yourself to your readers.

If You’re a Good Writer…

The strength of the Netflix series format is that it has the best of both worlds. You can write an episode that has a bang-up short-term conflict that wraps up fairly completely at the end with a super climax and denouement, giving the readers that feeling of catharsis they really want. At the same time, you have empathetic characters and an overarching main conflict (or conflicts) that have both been developed by this episode, but not as much as we would like, so we really want to read the next book, and the next, until we get to the end when everything wraps up. Which is why the second season often doesn’t do so well. As Episode 2 of the graph shows, the climaxes do not have to coincide, because they are part of different conflicts.

And if you’re really top-notch, you can get away with the stunt the hugely popular Dallas soap opera played in 1980, killing off one of their main characters at the end of the last episode of the season and not letting on who did it, making their fans wait until the new season in September to find out. This blatant stunt created a huge amount of discussion and controversy, which, of course, was exactly what the producers wanted.

Think of Your Readers

I don’t suggest the average writer try that sort of stunt. The key point to consider is how readers feel at the end of each episode. If they feel satisfied for the moment but still concerned about the eventual fates of the main characters, you have done your job; they will buy the next book. If readers feel manipulated and cheated, they will dislike the author more than they like the characters, and your chances of further sales are toast.

And make sure you don’t write a “pot-boiler,” which meanders through a bunch of meaningless actions and does not develop the overall plot or the characters. That will just leave the readers feeling bored.

If you are writing any kind of episodic format, make sure that each episode has its own definite beginning, middle, and end, and that readers have been taken through a complete emotional experience that leaves them mostly satisfied, but still wanting more, because there are bigger issues that have yet to be solved.

8 thoughts on “A New Novel Format: the Netflix Finite Series”