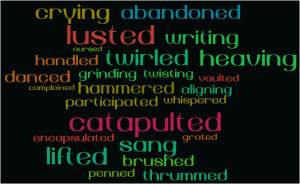 Ok, I admit it; I’m a word geek. I love words. I love the way they come together and combine to create images, the pictures they paint. My father was an artist and I’m sad to say I did not inherit his gift for drawing and painting, but I did learn to paint with words.

My pallet is alive with colors. Nouns are my white, the basic foundations of all sentences whether subjects, objects, or extraneous things thrown in to widen the base. Adverbs are black, adding dark contrast, and must be used sparingly. Adjectives are purple where a little goes a long way, and too much simply obliterates the subtler shades. Conjunctions and prepositions are the primary colors, tossed in here and there to combine with the other words, to create the final hues and tones. END_OF_DOCUMENT_TOKEN_TO_BE_REPLACED 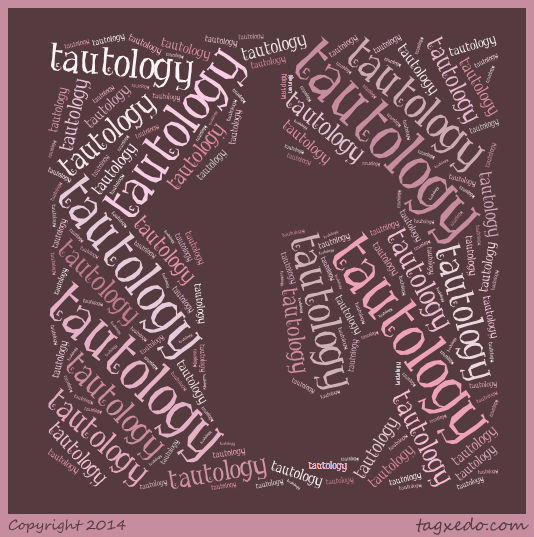 I bet you do. In fact, I’m sure you do from time to time. Maybe rarely, but I’m certain you’ve done it at least once. In fact, I know you have because I’ve come across quite often in the books I’ve reviewed.

It’s an easy trap to fall into when you’re writing, but it’s something to try to spot in your scrupulously thorough self-editing. However, as with most glitches, it’s more likely to be spotted by your beta reader or editor.

What are common examples of tautology ? Here are some you may recognise and just may have used yourself. Some are taken from books I have reviewed: END_OF_DOCUMENT_TOKEN_TO_BE_REPLACED

I’ve often wondered what exactly happened – when did using adverbs become taboo? Veteran author, teacher and mentor Arline Chase is going to explain it for us.

Most of you are too young to remember Tom Swift, but he is the reason for all that advice about avoiding adverbs, and especially avoiding a “said” followed by an adverb. Here’s an example from TOM SWIFT AND HIS ELECTRIC RADIO

This form was greatly in fashion in the 40’s and 50’s, but for today’s film and TV educated audiences, it leaves much to be desired in terms of an image and we all know images are good writing. Many editors consider this “lazy writing” and refer to such combinations as “Swifties” an allusion to the old Tom Swift novels which were very popular in the long ago. Editors have a full range of “Swiftie” jokes, i.e. “I’m too tired tonight, dear,” Tom said, limply.

Yes, back in the when, the best writers of the day used them. Swifties abound in Agatha Christie, and other best-selling writers who started in the WWII era. But editors who are buying today will not respond well to them. Now I grew up on Tom Swift, Brenda Starr, and Nancy Drew and have read any number of Swifties in my time. Used to write a lot of them too, until I heard some editors telling jokes at a conference.

Arline Chase became a publisher at Write Words, Inc. on Jan. 1, 2000. She is an award-winning author, journalist, teacher, and mentor to authors all over the world. Arline is a long-time member of the International Women’s Writing Guild and has led workshops at their conferences as well as workshops and panels at Malice Domestic and other writers conferences. She is a member of the Author’s Guild, Mystery Writers of America, Sisters in Crime, Romance Writers of American and the Eastern Shore Writers’ Association. You can learn more about Arline on her website.