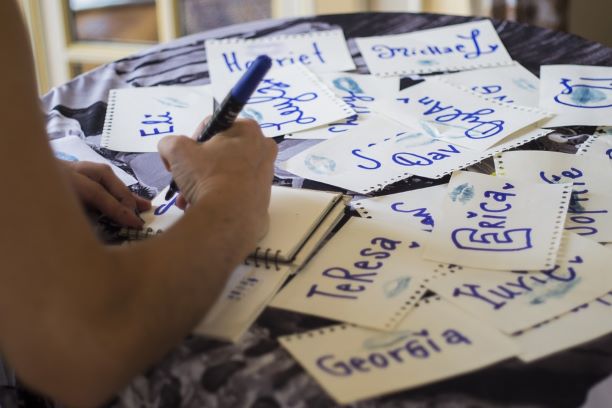 When writing a novel, choosing names for your characters can be alternately fun and frustrating. I would doubt that any of my books go from start to finish with all the same names; many of them undergo several iterations before I’m happy with them. Personally, I love figuring out a name for a new important character, but it can be a long and bumpy journey, especially if I don’t think it through completely. Here are some things to consider:

Is your character an 80-year-old woman? Do you know what names were popular in 1940? Luckily, with a search online, that’s easy to pin down: Betty; Judith; Margaret. Those are all, of course, perfectly good names, even today, but they are not nearly as popular now as they were then. What’s interesting, though, is that name popularity cycles, which means that what’s old becomes new again. The most popular girls’ names for 2020? Emma, Olivia, Ava, Isabella. On the one hand, this shows that any name you pick is probably okay, but think logically about it. If you had a sixteen-year-old girl in a story, would you want to name her Hortense or Dorcas? If the above 80-year-old was named Britney or Madison, would your readers agree those were believable names for her age? Just remember that your quest is to bring your readers into your make-believe world, and if a name seems out of place or out of time, that might be just enough to pop them out of the story.

In my paranormal series, my female main character is named Lacey. In one book, I introduced a young girl ghost and I gave her the name Lucy. It conveyed everything I wanted for her—the time she lived in, the middle-class origins. It was perfect. Until I realized it was only two letters different than my MC’s name. I make it a point to keep to a minimum names that start with the same letter as my MC’s (or any other prominent character), but to have one so similar would be, I think, unnecessarily distracting, even confusing. So I renamed her Trudy. Much better; still conveys her time, but much easier to keep her distinguished from anyone else in the book.

A couple years ago, I was writing a western and I needed a throw-away name for a one-scene-only character. I came up with a fittingly western first name, then tried out several last names until I found the perfect match. I was just about to write it down when I realized… it was the real first and last name of a friend of mine! No wonder it sounded so good. Gah. Similarly, I wrote another book and introduced a secondary character, decided on a name that sounded good and used it. Only after I’d published the book did I see a commercial for a U.S. Congressperson with the same name. Whoops! I quickly changed the name in the book by a single letter and uploaded the new version. Not a major faux pas, but still… I’m learning to Google names before I use them.

10 thoughts on “Choosing Names for Your Characters”