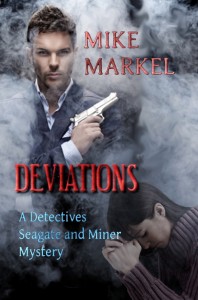 Former police detective Karen Seagate is drinking herself to oblivion and having dangerous sex with losers from the bar when the new police chief tracks her down. It seems there were problems with her departure. A high-profile murder gives Seagate a chance to work as a detective again … but the new chief is one for the rules, and Seagate has too many deviations from official protocol. These deviations might get her fired. They might also get her killed. But she’s determined they’ll help her find the killer.

Deviations, the detective novel by Mike Markel, is available from Amazon.com, and Amazon UK.