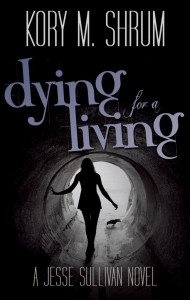 There was no pleasure in it. His movements were mechanical. He couldn’t get out of the room fast enough, leaving me alone with my three dying friends. I pulled myself to my knees, trying to stand. When a wave of dizziness took me, I crawled to Lane’s chair and pulled the gags out of his mouth.

“Save Brinkley,” Lane said as I untied Ally and Brinkley’s gags. My three favorite people in the world, dying, and there was nothing I could do about it.

“No one’s going to die, but me.”  I barely saw them through my tears, wiping them out of my eyes as fast I could. “The cops will be here any minute now. Just hang on. Someone will come.”

Lane whispered, losing air. “If you survive, Jess, they’ll keep coming for you. You’ll need Brinkley to keep you safe.”

I shuffled back and forth between their chairs, watching blood pour out over their thighs, pooling in the floor at the feet. Brinkley’s blood was the first to touch the floor. I assumed this was because he was a big guy. Already half-pulverized, I still couldn’t believe he had any to spare. The sight of a growing puddle made me wail louder. I searched the room for anything I could use to stop the bleeding. Aside from their clothes, I had nothing. The bed was stripped and not another scrap of cotton existed. My feet squeaked as they slid over the wet stones.

I circled the room twice, laying a hand on each of their chests. They were cooling, sticky, but none of them had the pull of death yet. My mind raced. This couldn’t possibly be happening to us. How did we end up here? We knew this would happen. Why hadn’t we managed to stop it?

“I’m sorry I didn’t tell you I was going to look for the little girl,” Ally whispered. “They wouldn’t have taken me if—”

“Don’t do that,” I said. “None of that last confession crap. We’re not dying here.”

I removed my shirt and shoved it against her stomach, adding as much pressure as I could. I waited, but I didn’t feel the pull. I paced again, touching each of them, feeling as though I was playing the most bizarre version of eenie-meanie-minie-mo. Something stank, putrid. Whatever it was, it was on my hands. My stomach turned and I dry heaved twice.

“I’ll save whoever goes first,” I said, helping Lane to steady himself. “But the other two of you will have to fight. Kick, scream, whatever you’ve got until someone comes, okay? Do you hear me?”

You didn’t prepare me for this. I wasn’t thinking about death. Dying was what I did best. It didn’t scare me to die. Whenever I died I’d wake and the people I loved would be there — but not this time.

I would lose someone tonight.

“You led me here to die,” I said, speaking to Gabriel. As if I conjured him, the room changed and grew warmer. Feathers rained into the room like fallen ash. I looked up to find Gabriel standing behind Brinkley and Ally. His tie was midnight blue and matched his eyes. The utter sorrow I saw could never make me believe this was anything Gabriel wanted or planned.

“Help us,” I said. I wanted Gabriel to be real, to have real divine powers. Ally’s breath became labored. I reached for Ally and pulled her from the floor into my lap. I rocked her gently.

You can only save one, he warned me.

How the hell could I give up on any of them?

Death came when I pressed my cheek against Ally’s cheek. I felt the pull when it’d begun. I was replacing her, feeling that string tighten in my navel and the suction of the mini black hole that would take my life instead of hers. Ally’s head fell back as she gasped for air. Then I heard Brinkley beside us lapse into ragged breaths.

I couldn’t replace them both. I reached out and tried to grab him anyway, willing to try. But I couldn’t reach him with Ally in my lap. All I could do was save her. Save her but—I choose them all, I told Gabriel. I need them all.

And as if in response, he spread his wings wide, and enveloped my world in darkness.

One thought on “Book Showcase: Dying for a Living”