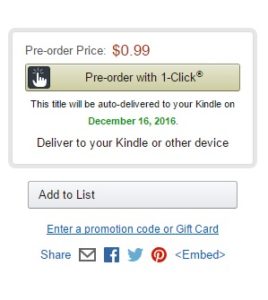 Amazon recently made some changes to their pre-order process that give authors more flexibility.

Back in 2014, in what was considered a great leap forward for self-published authors, Amazon provided the ability to offer books for pre-order. Previously, only big publishers had that option on Amazon. While this was a great move, the pre-order process on Amazon had some strict requirements. Book files had to be uploaded ten days prior to the book’s on-sale date, and if you missed the deadline (either because you failed to finish the book or because you simply forgot to check the box saying it was the final copy of your book), Amazon canceled your pre-order and you were banned from doing preorders for an entire year.

The new policy, which some authors say they noticed in early November, has three major features. It gives authors more time to get their final book in, allows authors to push back the pre-order’s on-sale date if they have fallen behind, and somewhat limits when the one-year ban will be enforced.

The first change reduces the time between the final due date of your file and the pre-order. Under the new rules, you have to get the file in about four days early. In Amazon’s FAQ (in the Requirements section), it notes that pre-orders must be delivered “three days” in advance of the on-sale date. For Amazon, three days, means the entire three days, so your file is due by 11:59 pm four days before the on-sale date. Once the deadline passes, you cannot make any changes to the pre-order file. That is the one that will be sent to customers who have pre-ordered the book. I will note that this rule change just codifies what people who’ve used pre-orders before have already noticed. Even when the ten-day requirement was there, you could upload a different file up until roughly four days before your book went on sale. Then, you got locked out and were unable to make any changes.

The second change Amazon has made is very helpful. If you get to the point that you realize you can’t get your final file in for some reason (car accident, health problem, or you’re just kind of flaky), then you can push back the on-sale date. According to this FAQ, “You can postpone the release date for your eBook one time, as much as 30 days past the initial release date. Customers who pre-ordered the eBook will receive an email letting them know that you have delayed the release of your eBook.” This is a great change for authors and customers. I suspect customer concerns are why Amazon made the change. Under the old policy, if Amazon canceled your pre-order because you missed the deadline, the company notified all those customers that the pre-order was cancelled (Amazon doesn’t charge until it delivers the book, so thankfully no refunding was involved). Those customers would then wonder why the book wasn’t being published. They might check the author’s website or social media and learn the book isn’t truly canceled, that it is just delayed. And instead of getting the book they wanted a few days later than they wanted it, the customers now, if they wanted the book, had to wait for the author to make the book available for sale, then go find it on Amazon and place another order. While some customers wouldn’t bother, as the pre-order was an impulse purchase, those who really wanted the book would be very annoyed at the extra work they had to do. So it makes sense to allow customers to simply get their book with a delay — a delay that Amazon can place squarely at the feet of the author/publisher. In the past, authors who got complaints could simply blame Amazon, saying they didn’t want to cancel their readers’ orders but big bad Amazon wouldn’t let them reschedule, even when they had a legitimate reason for delay (such as death in the family or health crisis). Under the new policy, all the delays/problems fall on the shoulders of the authors, not rigid policies enforced by Amazon.

The third thing that is slightly different is the one-year ban on pre-orders if you mess up. There is still a one-year ban, but it is only if you, the author, cancel a pre-order. It used to be that Amazon would cancel the pre-order if you didn’t get the file in on time. The new policy doesn’t offer any circumstances for which Amazon would cancel a pre-order, so it’s really all up to the author now. With the added flexibility, authors should only need to cancel pre-orders in extreme circumstances. However, if you do cancel, the one-year ban on setting up a pre-order goes into effect. It wasn’t clear from the FAQ what would happen if you pushed back your release date 30 days and still didn’t have the file ready. That could be a circumstance in which Amazon cancels your pre-order and puts you on the ban list, but it’s not specifically stated, so I don’t know the repercussions.

Those are the major changes associated with Amazon’s new pre-order policy. Do you think this will help you and your readers?