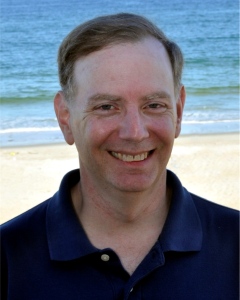 Five years ago, I finished my very first novel and it needed a book cover. Lacking the funds to hire a designer, or even purchase a pre-designed cover, I wondered: How hard could it be to do it myself?

Six cover revisions later, I can confidently conclude that I asked a foolish question while embarking on a long road of awkward misfires. I learned some tough lessons, and hopefully you can avoid my mistakes.

Chasing Redemption is a science fiction military thriller that follows the exploits of a space vessel facing alarming revelations that could lead to war. So, how did I decide to capture this sweeping tale in a book cover?

Cover One: Yeah, this was the original cover. 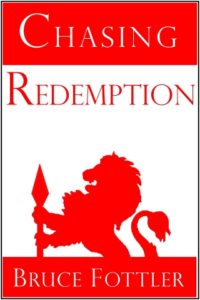 I can already hear the snickers and face-palms. What on earth does a demi-lion holding a spear have to do with a military sci-fi novel, you wonder?

You see, I wanted something other than a typical sci-fi cover with spaceships and planets. I had actually thought I was being clever by featuring the crest of the space vessel Vanguard, which is a variation of the current official crest of the HMS Vanguard of the Royal British Navy. Yeah, I got way too much into it.

No doubt that I had succeeded in designing a cover that stood out, but for all the wrong reasons. In fact, to make this miscue even more memorable, I decided to upgrade the cover a short time later.

Cover Two: Do you think I learned anything? 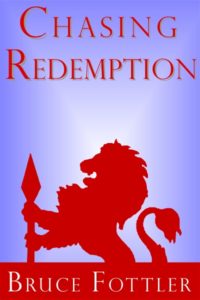 I just couldn’t let go of the demi-lion, but there was good news to come. In my next cover upgrade, I managed to ditch the crest.

Cover Three: Ditching the crest was the only good news. 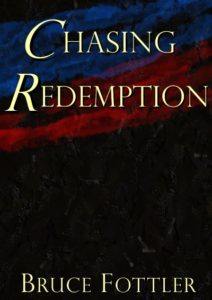 A couple of color swooshes against a textured black background, and presto, I created a whole new mess of a cover. UGH! What was I thinking? Fortunately, a couple of confused readers chimed in and I quickly decided to fix the cover.

Cover Four: Because a minimalist approach was the answer? 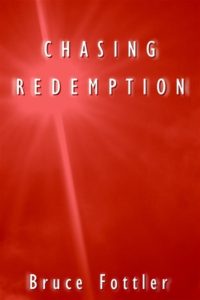 Can you tell that I still had no idea of what I was doing? Blame it on my irrational fear of stereotypical sci-fi covers. I was too afraid to fully embrace science fiction.

Months went by and I wondered why the book still wasn’t selling very well. Shocking. In the meantime I had learned how to better use my graphics software to create increasingly elaborate designs.

Cover Five: Because doubling-down on the demi-lion crest was a good idea? 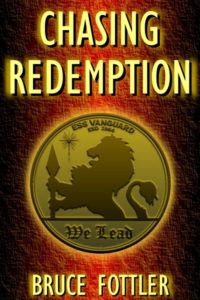 I was actually feeling fairly proud of this rendition, and it remained the book cover for a couple of years. It took that long before a realization finally came over me, or as we say here in New England: “Light dawns over Marblehead.” This cover, as the ones before, conveyed nothing of what the story is about. My graphic skills may have improved, but my grasp of cover concept was still way off the mark.

By 2015, I had written and published four more (unrelated) novels, which included developing DIY covers for each. I had also found several on-line book cover resources and even a cover critique site. I carefully studied what worked and what didn’t, and came up with far better covers for my subsequent books. But I still needed to address the Chasing Redemption cover.

I finally let go of my stubborn perceptions and embraced space vessels, planets, and science fiction in all its geeked-out glory. 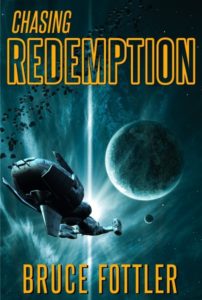 Thanks to a cover critique site, and a Shutterstock account, I was finally able to cobble together a decent cover that conveys something of the story. While not designer perfection, it’s a far cry from what I had started with.

1. Ideally, book covers are best left to a competent cover designer. I understand that many of us lack the budget for this, but keep in mind that the DIY learning curve, as I’ve hopefully demonstrated, can be embarrassingly steep.

2. If you go DIY, be sure to do your homework. Study over book covers in your genre to see what works. I highly recommend looking over the monthly book cover contests at The Book Designer. Joel Friedlander does a wonderful job of summing up why a cover works, or doesn’t.

3. Don’t work in a vacuum. Get feedback. Sites like Cover Critics.com can be very helpful. You can count on receiving constructive feedback, but you’ll also have to be willing to accept criticism that you might not want to hear. As painful as it might be, it’s always best to deal with bad cover news before you publish.

4. Just because you can easily replace a cover doesn’t mean it’s an option to be used repeatedly, and please, not six times! It’s always preferable to get your cover right the first time, because you don’t get a second chance at a first impression. I still cringe over all the potential readers I likely lost with my previous cover fails. I also remain thankful that Nathan Shumate over at Lousy Book Covers never came across them.

Remember that people are taught not to judge books by their covers, except when they’re shopping for books.

Bruce Fottler has written and published five novels, and has also dabbled in producing and directing film shorts. For more information, check out his Amazon Author Page or his Goodreads Author Page.