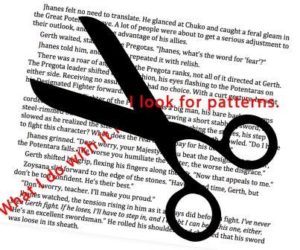 This should be called “Mistakes I Made That You Shouldn’t” series. Once more, you lucky people to will get the benefit of my lengthy writing experience. As in, lengthy writing is the problem. I’m editing a novel I wrote several years ago and cutting out all the junk I have since learned not to put in. If some of you are now where I was then, these examples could help tighten up your language. Let’s see how many words we can save if we are firm with ourselves.

English has two ways of making a future verb: adding, “will” and adding, “am going to.” “Will” indicates a simple statement of the future. “Am going to” indicates a plan. As in,

“I will trip on that rope.” Or “I am going to watch Netflix tonight.”

Another difference between these two expressions is that “am going to” has three words, and “will” has only one. Do the math. (2 words saved)

“What kind of services are we going to have to provide them here?” How about, “What services will they need?” (13–5=8 saved)

Descriptive words and phrases set the scene for what we’re planning to say, and people use them often in speech. But they use up words. If I find I have used two of them in a sentence, I take one out.

“They headed out down the road.”

“The troop worked on the lower face all morning, until everyone had made it up to the half-way point.”

Should there be a comma? Actually, there shouldn’t be two qualifying phrases, especially two that contradict each other. Take out one and you lose the comma as well. (19-9=10)

Other IU writers have dealt with “I think” and its opposite, so I won’t bore you. But as well as its other drawbacks the phrase adds words. (2)

It’s always a good idea to reveal how people are moving or reacting. The technique can do double duty as a dialogue tag. But be careful of overdoing it. Watch this one:

In five short words the author has said the same thing three times. Giving a positive gesture and saying “yes” means the same thing. And “It is,” says it with no help at all.  (5-3=2)

“No, you have to lead them well, so they only die if it’s absolutely necessary.”

“No,” slows down and breaks up the flow. And is unnecessary.  (Only saved 1, but it’s important.)

But be Careful with Negatives

Is This What You Really Want to Say?

“He was able to take advantage of her longer swing to get inside her guard.” Unless he is having difficulty, “He took advantage…” does just as well. (15-12=3)

They Were, There Are, There Is

“When they dismounted, they were in front of a huge rock face.”

“They dismounted in front of a huge rock face.”

There are lots of reasons for not using “there are.” (Oops!) The phrase fills in words, slows the flow, and softens the power of the verb. (12-9=3)

“I’m sure there is someone in the Pregota Clan who would do a much better job.”

What We’re Going to Do Is…

This is the standard opening for a teacher or foreman who is about to give some important instructions, so you guys better listen up. Unless your character is in one of those situations, don’t use this phrase. I’ve completely stopped using it. People may talk like that, but readers don’t want to plough through it.

“What they’ll try to do is stampede our stock so that they can pick them up in the forest.” “They will stampede the stock…” is fine, plus it’s stronger, more direct writing. (6-2=3)

“What I do with it is, I look for patterns.” This is just an obnoxious spate of words that has no function. I’m disgusted at my former self for writing such garbage. “I look for patterns,” does the job with less than half the words. (9-4=5)

Phrases are neat ways to organize your syntax and reveal meaning. I am by no means a comma commando, but remember that every comma stops the reader’s “voice,” and slows down the story.

“She swung low, backhanded, to counter.”

“She swung a low backhand to counter” The second one uses more words, but it is smoother. (6-7= adds 1 but much better writing.)

Colloquial Expressions Have Meaning, but…

In speech we often add expressions that lead our listeners to a deeper and wider understanding of our meaning. For example,

“Go and do whatever it is that you do before a party.”

The “whatever it is,” gives us a hint that the speaker doesn’t care what the person does. If you are writing a novel in which nuances of expression are important, you leave that in. If you are writing an action story in a simpler style you’d be much better to say, “Go and get ready for the party.” (12-7=5)

“Here is the short answer. Please wait a moment while I gather my thoughts.” We often stick in these “place holder” phrases to slow down the conversation while we gather our thoughts. Is that what you want for the flow of the dialogue? (5)

A “continuing action” phrase only works when it is a motion in progress, usually related to another motion or the passage of time.

“He began to unload the horse while she gathered firewood.”

“He began to unload the horse, but she stopped him.”

Can you see how “began to” fits one situation, and not the other? If you say “He unloaded the horse while… you save 2 words and are more accurate. (2)

I’m not suggesting that you can cut that much off your MS, but these words and phrases often come at important points, and their effect in slowing down and chopping up your story is more important than the math.

I’m sure many of you have pet frills that you’d like to pare off your own writing. Please feel free to add them in the comments section below for our elucidation. (Big words add to the length of the MS as well, come to think of it). Try “benefit.” (11-7=4 letters saved!)