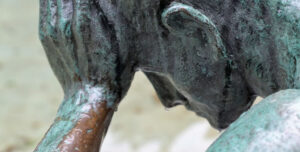 Do you have self-doubt? Guess what? You’re probably a writer. No, I take that back; you’re probably human. Yes, we all struggle with self-doubt at one time or another. If we didn’t, I daresay we’d have wooden blocks in our heads instead of brains. I believe any thoughtful, contemplative, and — especially — creative person suffers from self-doubt, be it a momentary pause or a lifelong battle. The big question is: how do we deal with it?

Recently I watched one of my favorite movies, Shadows in the Sun. It’s about writers, one young, one older. The older one (Harvey Keitel as Weldon Parish) has not written in twenty years, not since he had a best-seller and then lost his wife. He’s paralyzed by the fear that, along with his wife, he’s lost the world-acclaimed talent he used to have. He sits at his typewriter, fingers poised over the keys, and tears stream down his face. He can’t type even a single stroke.

The younger man (Joshua Jackson as Jeremy Taylor) wants to be a writer, has written a little, but is not sure he has what it takes. He writes in fits and starts, one step forward and two steps back. He has no idea if what he’s written is any good at all, or if it ever will be, and not knowing, he can’t commit to giving it his full effort.

I think most of us can identify with either, or both, of these types of self-doubt. Okay, maybe most of us have not had a best-seller, but we may have written a book that we really, really like, and that did pretty well in sales and got great reviews. The “problem” with success is: how do you follow up on that? If you were struck by an inspired story, created complex, well-rounded characters, and had a kick-ass ending, can you do it again? What if you can’t? Should you even try?

Second scenario: you don’t know if what you’re writing is any good. You don’t know if you’re on the right track. Are you just deluding yourself? I would guess that ALL of us, at some point early in our writing careers, felt some of that. But here we are, months or years (or decades) later, and we either pushed through it, went under it or over it or around it, and we are writers. We are writing. Whew!

Now in the movie, because of the story arc that lasts about ninety minutes, the characters each wrestle with their own doubts, enter into their own dark nights of the soul, face their fears, and discover a way through. Bingo! Two writers, both free of self-doubt, both committed to new writing, both living happily ever after. *sigh*

Guess what? Doesn’t happen that way. At least never has to my knowledge. No, what happens is I start a new book, I get two or three or five chapters in and… I hate it. It’s flat. If I don’t like it, how can I expect my readers to like it? But how do I fix it? DO I fix it? Or do I toss it and start something else? Maybe after much gnashing of teeth and pulling of hair I figure out a way to liven it up. Introduce a new character that adds some zing. Think of a new twist to the story line. Okay, now I’m cooking with gas. Chapter nine, ten, and… wading into the quagmire of the middle slump. No, not again!

Yes, again. Because the self-doubt that we feel is not a once-in-a-lifetime event. It’s not something we confront once, stare down, and never see again. It rears up again, and again, and again. Why? Because we continue to create. Every time we start a new project, we’re endeavoring to create something that was never there before. If we didn’t, if we just did the same thing over and over, we wouldn’t be writers, creators; we’d be producers. But we are creators. We get a new idea, we develop a new character, we charge off into the wilds of a new genre… and around every corner lurks the specter of self-doubt. And we have to deal with it over and over and over.

Not quite fair, is it? Sucks, doesn’t it? Yes, it does. And I’m not going to blow smoke at you; there’s no magic wand. There’s no miracle cure. So again, how do you deal with it?

You can take the left-brain approach and analyze. This means sitting down and reducing your WIP into small, bite-sized chunks and comparing each aspect to the perfect story. Is your main character sympathetic (even if s/he’s a jerk to start), believable, and three-dimensional? Do you like him or her? Do you have sufficient back story, and have you developed his/her flaw(s), those things that hold him/her back now but will get him/her to the end of the book? How’s your story arc? Does it soar, or does it droop in the middle? Is it predictable? Surprising? Are you building tension? Think of all the things you look for in a good book, and see if yours holds up.

You can take the right-brain approach and riff. Keep going, keep pushing through, and somewhere along the line you may have an “ah ha” moment when your character’s motivation becomes clear and your story falls into place. I do this fairly often, and I’ve had books that I’d been a micron away from abandoning suddenly become cohesive and satisfying. It’s hard-slogging; when I’m in this phase, I might only write a paragraph a day because I don’t know where I’m going. And I won’t deny that this approach could involve some heavy rewriting once you get it figured out, going back and tidying up the bits you need to bring it full circle. Eventually, thought, you reach that point of cohesion that makes it all worthwhile.

You can take a break, set it aside for a bit. Sometimes taking a step back and putting some distance between you and the WIP will give you perspective. Read your favorite writers and leave yourself open to inspiration. Write something else, something totally different — a character study, a journal entry. Distract yourself so you’re not trying too hard, and very often the answer will light on your shoulder like a windblown feather.

The point is, don’t let the self-doubt win. You may have to wrestle it to the ground, or slash your way through it with a mental machete; dance around it or build a ladder so you can climb over it. But don’t give in. Don’t think that you are less than because you’ve hit a roadblock. It’s frequently a part of the creative process. It’s less about you and more about birthing an idea and bringing it to fruition. The good news is that this self-doubt is not a reflection of who you are as a writer; the bad news is that, because it’s part of the process, you will face it again.

But the good news in the bad news is that you will face it again because you will write again.

13 thoughts on “Writing with Self-Doubt”

This site uses Akismet to reduce spam. Learn how your comment data is processed.