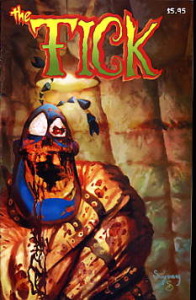 Not, not the comic book hero or the nervous twitch kind of tic – I’m talking about those gross, disgusting, horrendous little bugs that should be eradicated from this planet. The pictures of swollen ticks were just way too disturbing to post here, so I went with the 20th anniversary edition of the comic book. It is, in fact more attractive than a swollen tick. Google it if you don’t believe me.

What in the world could anyone get wrong about ticks? Why don’t you ask the producers of a TV show that will remain nameless that’s supposed to be set in The Hamptons in Long Island, New York and stars a handsome young man as a concierge doctor? The network it’s on is three letters and the initials of the show are R.P. Now, I know you’re wondering “Kat, what in the world were you doing watching a dumbed-down version of the medical drama House?” It wasn’t my fault. I saw the Saab convertible and I couldn’t move away. END_OF_DOCUMENT_TOKEN_TO_BE_REPLACED