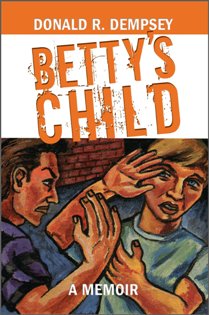 In the tradition of Frank McCourt and Angela’s Ashes, Don Dempsey uses Betty’s Child to tell the story of life with his cruel and neglectful mother, his mother’s abusive boyfriends, and hypocritical church leaders who want to save twelve-year-old Donny’s soul but ignore threats to his physical well-being. Meanwhile, Donny’s best friend is trying to recruit Donny to do petty theft and deal drugs for a dangerous local thug.

Young Donny is a real-life cross between Huckleberry Finn and Holden Caulfield as he tells his story, with only his street smarts and sense of humor to guide him. Donny does everything he can to take care of himself and his younger brothers, but with each new development, the present becomes more fraught with peril–and the future more uncertain.