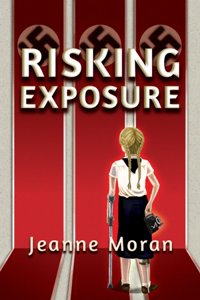 Risking Exposure
by Jeanne Moran
Available from Amazon.com in print and Kindle editions.

Munich, Germany, 1938. The Nazis are in power and war is on the horizon. The law makes fourteen-year old Sophie Adler a member of Hitler Youth; her talent makes her an amateur photographer.

Then she contracts polio. During her long hospitalization, her Youth leader supplies her with film. Photographs she takes of fellow polio patients are turned into propaganda, mocking people with disabilities. Sophie is now an outsider, a target of Nazi scorn and possible persecution. Her only weapon is her camera.

Will she find the courage to separate from the crowd, photograph the full truth, and risk exposure?