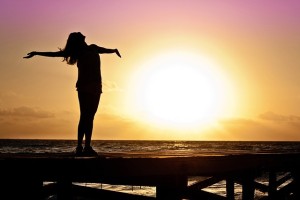 After I finished grad school, I took some time off from writing. Okay, I took a number of years off. I was discouraged that I hadn’t gotten a publishing contract right away. I couldn’t even sell a short story. So I gave up and put everything away, and concentrated on raising my kids.

I don’t know how many of you have stepped away from your passion for any length of time. But it started to grate on me. I knew I needed to start writing again, but I felt as if I needed a jump start. So one summer when the kids spent a number of weeks with their father, I committed to working through The Artist’s Way by Julia Cameron. It’s a twelve-week, self-guided course designed to help stuck creative-types get their mojo back. The original book was published in 1992, and it’s spawned a number of spin-off publications, from workbooks to journals to flash cards.

The journal makes sense; one of the things you’re supposed to do every day is a thing called morning pages. Basically, you put pen to paper as soon as you get out of bed and write longhand for three pages – whatever comes to mind, whether it’s related to your WIP or just griping about your life. You’re not allowed to go back and edit. You’re not even allowed to reread what you’ve written until the end of the course. What this does is allow you to get all the junk out of your head first thing in the morning, to clear out the space for creativity. I did this off and on for a few years (although the last couple of times, I resorted to the computer!), and I did find the practice helpful.

But what I want to talk about in this post is the other practice that Cameron requires throughout the course: the artist date. You’re required to set aside an hour or two each week for some sort of activity that will nurture your creativity. And there are rules: You have to plan the date, and you can’t take anybody else with you.

Both of these rules make sense, when you’re not digging in your heels against the whole idea. Think of all the people you know who have a daily appointment called “Gym” on their calendars. They do it to make sure they go, and to make sure they don’t schedule anything else during that time. The same reasoning applies here – you need to make plans so that you don’t blow it off as soon as someone gives you a better offer.

As for going alone? I don’t know about you, but I have friends who will agree to do thing A one-on-one with me, but then suddenly we’re doing thing B with three other people and I never get to do thing A at all. Also, the idea is to feed and nurture your own creativity; if others come, too, you will likely find yourself jollying them along instead of listening to what’s going on inside your own head.

And the stuff inside your own head is what’s important here. The idea of an artist date isn’t just to step away from life’s daily stresses – although it can help with that, too. The most important thing, though, is to give the wellspring of your creativity an opportunity to replenish itself with thoughts and images and emotions, so you can go back to your work with new ideas, or at least a sense of the way forward.

Even though it’s called a date, don’t think you have to spend a fortune. Taking a walk doesn’t cost anything. Poking around the dollar store for colored pencils (or something else that strikes your fancy) is unlikely to break your budget. And don’t think it Must Be Done with Serious Intent. If what you really want to do is see a cartoon and get ice cream, don’t force yourself to go to a museum instead.

Think of the artist date as one more tool in your arsenal. If you’re stuck, give it a try. You might decide it’s fun.

15 thoughts on “The Artist Date: Resuscitating Your Writer’s Mojo”