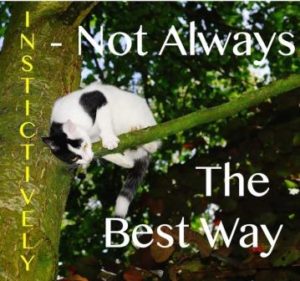 I may have mentioned in my post a couple of months ago that inept critics, academics and bloggers may create awareness of a certain usage simply to give themselves something to write about. That was me in my curmudgeonly mode. Now I hope to redeem myself by committing a like deed for positive reasons: creating awareness because I see overuse and misuse of a word.

And to show how much time good writers spend on choosing their words (or how obsessive certain people get about word choice), I’m going to spend this whole article on the usage of one word: instinctively.

The first argument against using any adverb is when it is being used to prop up a dull verb. Showing an action or emotion is more effective than telling about it.

He walked slowly and quietly forward, hardly compares, in brevity and power of image, with He crept forward.

However, this does not apply to adverbs such as instinctively, because they are so specific. I cannot think of one situation where the instinctive nature of an action could be emphasized by using a better verb. Perhaps one of my readers can come up with one.

So the choice becomes a matter, not of replacing the word with a better-turned phrase, but of whether we should be using it at all. Because people do use it, and often. Far too often.

Why Do We Use Instinctively?

When I look at places people use the word, I get the impression that writers think they can increase the tension of the moment by emphasizing that the character has no time or ability to react in any other way. The descriptor is being used, not because of the meaning of the word, but because of the emotion it evokes. Warning bells should ring.

Sure, it works, but the word needs to be used sparingly. Dare I suggest (with my curmudgeonly side glaring over my shoulder) about once in a novel? If you look at the above example, the adjective adds little to the action. The nature of ducking has already introduced an element of instinctivity. (Yes, I coined that word just now. You can start overusing it immediately, if you like.) Take out instinctively, and nothing changes. Replace it with suddenly or quickly. Nothing changes. Leave it out.

(Suddenly is also often misused for its emotional impact. In a recent edit, I found the author had used suddenly four times on one page. Only one case involved a quick and unexpected movement. Removing the other three made no difference to the passage.)

He knew instinctively, seems to have a similar magical effect on authors’ brains. They feel that the descriptor somehow adds a special power to the character’s thoughts. It doesn’t, especially when overused. Chop it.

Where Does Instinctively Fit?

The word should be used in a situation where it means something, where the instinctive nature of the action is important: either to show a lack of conscious ability to control the situation or because the personality of the character is demonstrated by an unusual or unexpected action. Especially when these actions have detrimental results, then conflict is increased.

The best use of the word I can think of is in non-fiction, but it demonstrates this use perfectly.

A right-handed driver, faced with a collision, instinctively throws up his right hand to protect his face. This motion twists the steering wheel to the left, turning the car into oncoming traffic.

In fiction, this idea can be used when a person instinctively does something he or she is not expected to do, perhaps because the other characters have misread the personality of the character. In this case, an author who has crafted a character to react in a certain way at a key point in the conflict will classify that action instinctive as a way of reinforcing the inevitable nature of the reaction.

And as with any descriptor, the writer must first decide whether the action and the other story elements have already shown that information sufficiently, and whether the use of a descriptor to tell is necessary.

So, when you find yourself instinctively wanting to use the word instinctively, look carefully at why you are using it. Then use the writer’s best test. Take it out. Does the meaning of the sentence change? Did you lose a lot of emotion or tension? Then cut it. Congratulations; you have just used a simplified version of Occam’s Razor to become a better writer.

While these two concepts often have similar effect on the responses of characters to stress (both usually cause illogical actions), they do NOT mean the same thing. This whole post could be written about Intuitively. Worse yet, sometimes the two are misused by interchanging them.