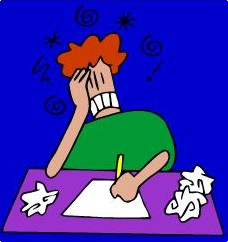 I think the overall feedback “show don’t tell” is about as productive as a coach standing at the side of a pool and yelling, “Swim better! Go faster!”

However, every cliché started out as simple brilliance, so instead of dismissing the catch-all comment in frustration, I started a list of what people really mean, such as:

These particular components aren’t the whole of what “show, don’t tell” means on a macro level, however, they provide direction for editing and even suggest some search terms for pinpointing issues at the sentence level. I discovered recently that when a writer thinks he is showing while the readers still feel removed from the scene, the reason can come down to the construct of just a few sentences. Below are some examples. [Please note that there are a million other ways to show versus tell, and I am not suggesting that you change every instance of these words or phrases; that will certainly ruin your manuscript. The purpose of these examples is merely to trigger ideas.]

Seemed or appeared to be
“Seeming” or “appearing” is a deduction by the observer, so why not show your evidence to the readers and let them deduce?
Telling: She seemed to know what she was talking about.
Showing: She answered the client’s questions loudly and without hesitation.

(Of course, introducing too many “ly” words in your attempts to show can create a different problem, so be judicious.)

Felt
Sometimes you have to tell the reader what the character is feeling, but you don’t have to do it in a way that puts the telling between the feeling and reader. For example:

Telling: She felt distanced from her family.
Revision 1: She felt like a colonist on the moon compared to her family.
This revision is a step closer to providing an experience for the reader, but the character’s perspective may still be in the way.
Revision 2: A colony on the moon would have felt more like home.
This second revision takes the readers directly to imagining a colony and feeling its contrast from their sense of home without filtering through the character first.

Sometimes, the fix requires more than reworking one sentence.
For example:

Telling: She felt betrayed by his words.
Showing: If you have to explain a strong reaction half-way through the book, you probably need to improve the lead-in to that moment. Ideally, the characters should be so clear and the dialogue so good that when the readers hear him speak those words, they will gasp in shock and feel betrayed on your heroine’s behalf without your ever having to tell them what she felt.

Saw/ could see
Do you need to tell the reader that the characters are performing the act of seeing, or can you just describe the view?

Was
“Was” has many legitimate uses, but it can also hide passive adjectives.
Telling: He was haggard. She was happy. He was fit. She was pretty.
Showing: Describe something about her and let the readers decide that she’s pretty. Point out his six-pack abs or runner’s calves, and cliché or not, the readers will have a better idea of what kind of “fit” he is.

Looked (as an inactive verb)
If “looked” can be replaced with “was”, “seemed”, or “appeared”, then the notes above apply.

Telling 1: He looked gaunt.
Revision 1: He looked like he hadn’t eaten in a week.
I would argue that, in addition to being cliché, this revision is still telling more than showing.
Revision 2: His clothes hung on his body like a washcloth on a wire rack.
This version provides a better visual, although you can go overboard with analogies just like adverbs, so be aware.

(“Looked” can be a valid inactive verb, but if it is used two or three times on the same page or three or four pages in a row, a couple of instances are likely to be opportunities for improvement.)

Looked (as an active verb)
As with “saw”, jumping right into the view could amplify the experience for the reader.

Version 1: She knew she would drown if she didn’t get out soon.
Version 2: The water was rising a foot every minute, so she had to find a way out, and soon.
The ultimate action is the same in both versions, but the second allows the reader to experience the evidence directly then realize the consequences at the same time as the character.

As with all of the examples, either version might be appropriate, depending on the construct of the scene. The important point is to be aware of what the reader will be feeling as well as what the character is feeling. Because, in short, “show, don’t tell” is about making the reader a participant in each experience, not just an observer.

What are some ways that you identify instances of telling versus showing?