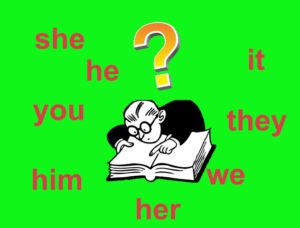 One of the most effective ways to obfuscate, distract and otherwise confuse your readers is to misuse pronouns. Here are some writing tips that will straighten out your pronoun use and add punch to your writing at the same time.

I’m sure you’ve seen it:

He screamed and flailed at him, while his father desperately tried to pull him away.

Without some context, all we know is that there are three characters in this scene, all are male, and one of the younger pair is upset with the other. What is actually going on, and who is doing it, is quite opaque. And all because of a few little pronouns.

You’ve known this is wrong since you were three-years old. Pronouns simplify language by preventing repetition of nouns. Case closed.

How Do We Fix This?

First we need a bit of knowledge about how pronouns work, which is pretty simple. A pronoun is a generic word that takes the place of a noun, called its antecedent. The main rule is that the pronoun’s antecedent is the nearest noun that precedes it, even if it was in the previous sentence. Melissa Bowersock handled that a while ago.

Mary, Beth and Jane, her clothes in tatters, appeared in the doorway.

Despite how awkward this sentence is, we have no doubt that Jane is the one with the costume malfunction, because Jane is the last noun before “her.”

Going back to our original problem sentence, we introduce at least one noun, preferably the most important person in the scene.

Joe screamed and flailed at him, while his father desperately tried to pull him away.

Joe screamed and flailed at Bill, while his father desperately tried to pull him away.

We still don’t know whose father, or who he is pulling. Okayfine.

Joe screamed and flailed at Bill, while Joe’s father desperately tried to pull him away.

But we have defeated the purpose of pronouns. If possible, you should use a person’s name only once in each paragraph, and here we have it twice in one sentence. We need a better solution

Names and pronouns aren’t the only way to indicate characters.

Joe screamed and flailed at the larger boy, while his father desperately tried to pull him away from his antagonist.

Now the boys are pretty clear, but the parenthood remains elusive.

Just adding or subtracting pronouns sometimes isn’t good enough. The next item in your toolbox is sentence order.

Though his father desperately tried to pull him away, Joe screamed and flailed at Bill.

By isolating the father in the beginning of the sentence, Joe has neatly corralled all the action, allowing us to know exactly who is who (whom? …whatever).

Likewise with Jane and her friends:

Jane, her clothes in tatters, appeared in the doorway with Mary and Beth.

But these are just patches which conceal a more serious problem. Sometimes you get a pronoun-heavy paragraph and no matter how you twist and squirm, the language still sounds stilted. At that point, you should be looking into more basic elements of a story.

Remember the basic use of paragraphs. Changing focus to a new person needs a new paragraph. It’s not always possible, but if you have a long paragraph about more than one character, try to divide the action into one paragraph per person. This will have the added advantage of chopping up your action sequences into quick, tense paragraphs, increasing the suspense.

If you have the “too many pronouns” problem in a paragraph, I’m willing to bet that when the action started, you backed off to describe it from an omniscient point of view. Thus you have two or three characters getting equal ink, and you have to continuously identify each one. You have also divided the reader’s emotional connection to the characters.

Fixing this problem will improve the emotional content of your writing, but a side benefit is that it simplifies the indication of who is whom. For example:

Wrenching his arm from his father’s desperate grasp, Joe screamed and flailed at the hate-filled face in front of him.

Okay, maybe a bit over the top, but using Joe’s POV results in much more emotion portrayed; plus every remaining pronoun clearly applies to the main character.

Pronouns are a convention to keep your poor readers from hearing nouns repeated over and over again, but pronouns don’t do their job if we can’t tell which noun they connect to.

I’m not going to try to solve the “grinding fingers” sentence at the top of the article, because that sentence describes action from two separate characters. They shouldn’t be in the same paragraph, let alone in the same sentence.