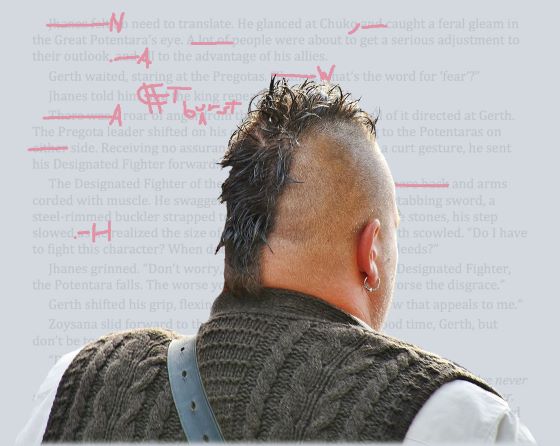 I wrote an article here a couple of years ago suggesting ways to tidy up shaggy writing. It’s been a while, and perhaps it’s time for another trim.

Everyone has a list of words and phrases you should “never use.” Many of these are not specific taboos. They are just loose writing that could be tightened if you recognize the symptoms and want to try harder.

Here are a few words and phrases you might consider adding to your private list. Note that I have found all of these at one time or another in a “real” book, and often while I’m polishing my own work.

“After” becomes a problem if you use it after telling us something that happened before.

Bad: “After jumping in the car, he drove off.”

Worse: “He drove off after jumping in the car.”

There’s nothing wrong with something happening after something else. But if the timeline is straight, we don’t need to tell anyone. “He jumped in the car and drove off.”

“After” is often part of a bigger problem: Keep your timeline moving forward unless there’s a good reason not to.

“Stand up, sit down, kneel down, gather together, empty out,” etc.

People think it sounds more powerful to add the preposition for emphasis, but it is usually redundant.

These extra words are only used in dialogue to show character or emotion. In a military context, “straighten up” has specific meaning. You straighten your room, but you straighten up your life. In narrative writing, people stand, sit, or kneel when they gather to empty their hearts to one another.

Got (My Pet Peeve)

Using “got” when you don’t need it is one of the laziest habits in the English language. We all do it in common conversation, but in writing it really stands out, especially when you get into complicated verb forms. “Had gotten?” What verb form is that? Say it out loud to yourself and see if you don’t cringe.

Yes, you “get” in trouble, so that’s reasonable use. But “I have got to go,” doesn’t need the word at all. Use “got” to indicate an uneducated character, not an uneducated writer.

See “Got” above. Covered in the original article. The same comments apply.

Writers who have been slapped too many times for using adverbs find ways to say the same thing without using the adverb. “On a regular basis” just means “regularly,” and wastes more words. If you really want an adverb, use one, or realize why you shouldn’t and rewrite the sentence.

Due to its Norman and Saxon heritage, the English language suffers from a duality created long ago by people living with those who spoke a different language. Often if you look at these redundant expressions you will find that one has a French heritage and the other, Saxon:

“Pick and choose,” however, does not fit, unless someone with an extensive German vocabulary knows a word like “pick” to go with “choisir.”

Interesting as this little item may be, remember that using these pairs together in written work is redundant and…well, as it happens, the word is pretty much the same in both German and French. So much for my theories.

Keep in mind that many of the examples I’ve mentioned are not completely wrong.  “Starts to,” for example. Smart Blogger suggests that the infinitive form of the verb is weaker.

“If it starts to rain, close the window.”

Better: “If it starts raining, close the window.”

However, if you have already used two –ing verbs in the paragraph, feel free to use “starts to” instead.

Note also that “never” means “never in narration.” All the usages that are mistakes in narrative become prime fodder for demonstrating different social and educational levels and more or less formal situations. A character I’m working on right now is a former mercenary now moved up in the world. Her friends all know that when she starts using “ain’t gonna,” the situation is dangerous, and it’s time to “straighten up and do what you’re told.”

5 thoughts on “Writing Tip: Another Set of Words to Trim”