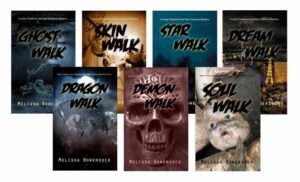 Coming from a position of doing only stand-alone books for the first 40 years of my writing career, however, I’ve run into an issue. I tend to do what I call “writing in the headlights.” What I mean is that I usually concentrate very narrowly on the chapter or scene in front of me, the one that I’m working on, and I seldom look back unless I realize there’s a plot hole that I need to fill. Once I finish a scene, I move on to the next, again, pretty much blanking my mind of what went on before.

This came up as an issue when I contracted with a narrator to do the audiobooks of my series. While she was recording Book 1, Ghost Walk, I was writing Book 17. When she’d uploaded all the chapters of Ghost Walk, I printed out the entire manuscript so I could follow along as I listened to check the wording and make notes. (I’ve found that even the best narrators sometimes say a wrong word or skip a line.) What I realized was that I’d forgotten a LOT of what I’d first written — about the characters, what they did, how they felt and thought. This in and of itself is not a problem; people evolve, they grow and change. To my mind, keeping the characters static through all the adventures mine have been through would be unrealistic. Real people change, and my characters do, too.

The real challenge for me was remembering where they came from. I’d forgotten some of their signature opinions, their mannerisms, so re-reading the first book was an excellent reminder for me. But it also pointed out to me that I needed a good system to keep track of all my characters.

I think we’re all familiar with story bibles, the notes we make of character names, descriptions, and plot points. Well, with a series that was approaching 20 books, I knew I needed a story bible on steroids. I set up an Excel spreadsheet with names (first and last), roles in the book, book titles and numbers where they appear first, ages, and descriptions. I put the first and last names in separate cells so I could sort on either; I found I sometimes couldn’t remember if I’d used a name or not, so this was a quick way to find out. And now, as I write each new book, I add the names as I go. I’ve got a monster list going. I don’t have all the names in yet, but I’m sure I’m going to have over 400 when I get them all entered. Way too many to try to keep track in my head.

Above is a sample of my spreadsheet. Sometimes, as you’ll see there, I do inadvertently re-use a name. I don’t worry too much about this; after all, how many Jims do you know? How many Carols? In the case above, the first Alec is a very minor character, only appearing in one scene, while the second Alec is a major character. They’re very different people and appear in different books, so I’m okay with that.

However, I’ve also found that I gravitate toward certain names, either first or last. I’ll come up with a name I like for a new major character, check my spreadsheet and… yeah, already used it. There’s that “writing in the headlights” thing again; I often don’t remember what names I’ve used. My spreadsheet keeps me from overusing my favorite names.

The spreadsheet has also come in handy when I re-introduce a character who appeared, oh, maybe ten books ago. There have been a few characters that I like enough to re-use, or a story just lends itself to that character’s field of expertise, but then I often have to dig back through the book where they originally appeared to remember what the heck they looked like. My character spreadsheet — if I had filled it out well to begin with — helps me with that. If not, it tells me where to find the character so I can look up him/her and pull their description from the original book.

My uses for the spreadsheet — and needs — seem to keep growing as I write more books. I’ve finished Book #25 now and am still adding little bits of info to the list. It definitely comes in handy, or at times points out a hole I need to plug. Either way, it saves me tons of time instead of poring back over an older book to find the detail I need.

What about you? What tools and tricks do you use to keep track of your series elements?

10 thoughts on “Managing Your Book Series”