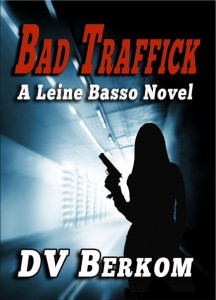 Author D.V. Berkom is pleased to announce the release of her new thriller, BAD TRAFFICK, A Leine Basso Novel.

Identified as a person of interest in three cold case murders, retired assassin Leine Basso is told to remain in Los Angeles until the investigation concludes. As a favor to Detective Santiago Jensen, she accepts a temporary position as a security specialist for A-list actor Miles Fournier, who believes he is the target of kidnappers. Leine finds she has her hands full trying to protect the head-strong celebrity.

To complicate matters, a woman claiming to be Miles’ long-lost sister appears and begs him to use his considerable resources to find her twelve-year-old daughter, Mara, who has been abducted by sex-traffickers.

But Mara has escaped and is alone on the streets of Los Angeles. The traffickers are determined to track her down and deliver her to the powerful client who purchased her for his twisted ends. Running out of time, Leine must find Mara before they do, or she will be lost forever.

BAD TRAFFICK was released December 18, 2012, and is available on Amazon.com and Amazon UK. 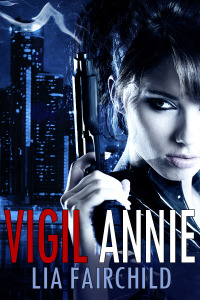 Author Lia Fairchild is pleased to announce the release of her new thriller, Vigil Annie.

Annie Crawford is an ex-cop living a double life. After her fiancé is murdered and she is left for dead, she’s desperate and seeking vengeance. She turns to a vigilante agency headed by a man with his own secrets. Annie works for them as they investigate the murder.

Now working on the wrong side of the law, Annie’s life has one purpose: justice. For her fiancé and the city she lives in. But as Annie’s strength grows, the agency struggles to control her. And the deeper Annie sinks into this new life the more she fears she may never return.

Vigil Annie was released on November 1, 2012 and is available through Amazon.com, Amazon UK, and Barnes & Noble.