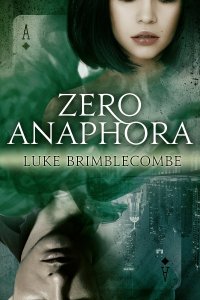 Anna is a professional escort with a disturbing and supernatural secret – something she is scarcely able to understand herself, let alone explain to others…

Despite her adoring clientele, she leaves her career behind when given the opportunity to take control of an underground circle of fetishistic materialists, who provide her with an unprecedented source of money and power. While others are oblivious to her past, a former client is slowly piecing together the clues, but becomes dangerously infatuated with her in the process. Will his obsession lead him to inadvertently discover the truth that lies behind her many methods of disguise?

Meanwhile, a new lover is slowly drawn into Anna’s inner social circle, placing yet more pressure upon her to find a way to preserve her true identity. But not every secret can be kept forever…

Zero Anaphora is available from Amazon.com and Amazon UK. END_OF_DOCUMENT_TOKEN_TO_BE_REPLACED 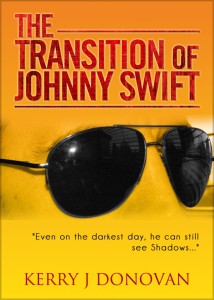 Frank Brazier has the perfect life. A contract to drive for a Formula 1 team. A supportive family. A stunning girlfriend. On the surface, everything is great, but Frank keeps a secret. On race days, Shadow-man visits. He sits on the nose cone of Frank’s racing car, or floats above the grandstand, waving taunting, distracting, eating away at his concentration. An accident in the making.

Frank starts hearing voices. Strange voices. Impossible voices. He’s losing his grip on reality and Paula, his sister, is dying. Doctors say she is brain dead. They want to pull the plug, but Frank knows she’s still in there, fighting. He can hear her calls. Shadow-man finally speaks. He says Frank can save Paula, but can Frank pay the price?

The Transition of Johnny Swift is available from Amazon.com and Amazon UK.

Excerpt from The Transition of Johnny Swift by Kerry J. Donovan: END_OF_DOCUMENT_TOKEN_TO_BE_REPLACED

Samuel Prite introduces you to thirteen tales of ghostly encounters, supernatural events and rather unfortunate happenings. As he leads you along this meandering path, it will become clear that Prite is not merely a guide, but someone, or something, far more sinister.

from The Wine Cellar

Several minutes later, he still had not reached the end of the corridor. This is insane, he thought. It’s no more than ten yards to the wall. The light remained the same size but now became clearer; it was the illuminated part of a doorbell. He reached out and pressed the brass button in the centre of the light.

Footsteps sounded beyond the light … they stopped … the sound of a handle turning … a crack of light appearing, and edging a doorway … then the door opened. Framed in a soft, golden light stood a man. It was impossible to make out any details as the backlight cast a shadow.

‘Sebastian, I’ve been expecting you. Please, do come in.’ The voice was mellow and clear.

“MD Hall writes tales of mystery that are inventive and imaginative, tales that have unexpected twists and spooky atmospheres.” – RichardS, Amazon Reviewer

A young woman gives up her career in order to conduct a mysterious social experiment upon an unsuspecting lover. While others are oblivious to her past, a former client is slowly piecing together the clues, but becomes dangerously infatuated with her in the process.
.
.

Anna, she was ever a conjecture, a guess, tentative and gambling, adverse to prediction. Beautiful like an uninhabitable planet, a painted snake. Venus fly traps in full bloom, delicious poison.

And so it became a Monday night, calm and no different from any other. He parked his Sedan nearby and marched up to the front of the complex. People came and went around him, oblivious to the magnitude of concern that pervaded the air like equatorial humidity. James punched her room number into the keypad. The intercom buzzed for a moment, then it was Anna’s voice on the line asking him to identify himself, which he did. He was cleared to ascend, legitimately for once. It was a smooth ride to the fourteenth.

“It has elements of mystery, romance, drama, and even some sexual themes, but delivers something that is more than just the sum of those.” – Hannah, Amazon Reviewer