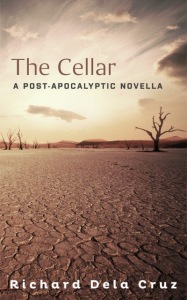 A hundred years after The Event, the earth has become a vast, barren wasteland. In this dying world, seventeen-year-old Daren is the sole hunter for his village. But food is scarce, and it’s only a matter of time before they all die of hunger or worse…until he discovers a can of beans, new and pristine, as if fresh from a factory. Where did it come from? And will he discover its source in time to save his people?

The Cellar is available at Amazon.com, Smashwords, Amazon UK, and most online retailers.

Exclusive excerpt from The Cellar by Richard Dela Cruz

“Over there.” Logan leaned out farther and pointed his finger to a dense portion of the woods. “It slipped behind one of those larger trees.”

With only flickering torches keeping the darkness at bay, all Daren could see was a line of trunks in the shadows. The branches were buffeted by the wind but there was no other sign of movement. Nothing alive seemed to be in the forest.

Then he saw it. A piece of gray slipped out from behind one of the trees. He held his breath as the edge of a hood emerged, then the head, then the body. The specter was bathed in the same eerie green light he saw in the forest. Its head was bowed down as if in mourning. The wind sent ripples through its robe as it moved along, the gray fabric betraying no stride. There was no lifting and lowering of limbs. The figure seemed to stand motionless, and yet it somehow kept moving. It glided over the earth, the hem of the robe quietly sweeping the ground.

“What should we do?” Daren asked, finally finding his voice.

Logan said nothing but stood transfixed. His eyes moved to follow the specter’s movements but the rest of him remained frozen in place. It was unnerving to see him that way: staring, open-mouthed. Logan usually didn’t scare so easily. Daren placed his hand on Logan’s shoulder and shook him, making his head bob from side to side. He turned to Daren with a bewildered expression.

“We should sound the alarm,” Logan croaked out. “They have to know that the Angel of Death is here!”

Daren tried to stop him, but Logan had already made it to the bell that was tethered to the platform by a piece of rope. He picked up the bell and hammered the air with it. The clanging reverberated all over the village. Torches lit up all over the shacks as everyone shouted and scrambled about. Children who were frightened awake wailed for their mothers. Everyone poured out of their shacks with pitchforks, knives, axes, sticks, spears, slingshots, and even the odd frying pan. Daren looked behind him to check the edge of the woods. As he expected, the phantom had already disappeared.

He watched as Arianna emerged from their home with a crossbow in her hands. She moved over to the center of the village to where the others had gathered. The torchlight glinted on the knives and axes as everyone looked around for any sign of danger. Arianna pointed to several of them and issued orders. A group of villagers then broke away to check the wall to see if there had been a breach. Daren could see Arianna looking around her frantically.

Arianna looked up at where Daren and Logan stood. As she ran towards the platform, Daren noticed that she’d forgotten to wear her eye patch. He had never seen her without it. She must have completely freaked out when she heard the alarm and found him missing. As he imagined what must have gone through her mind, he felt a pang of guilt.

“Are you all right?” Arianna slung the crossbow over her shoulder and proceeded up the ladder.

Arianna placed her hands on the wooden boards and hauled herself onto the platform. Her good eye stared wildly at him, checking for any injuries. A mass of scars covered the empty socket where her right eye used to be. Daren winced as he saw it for the first time.

“Who sounded the alarm?” she asked.

She answered her own question as her gaze fell on Logan, who stood there, barely breathing, keeping a tight grip on the bell. He just stared back at her.

“Where are the raiders?” Arianna demanded. “I assume you rang the bell for a reason.”

“The Angel of Death has come,” Logan mumbled.

Arianna creased her brow and looked back at Daren. The eyeless socket seemed more menacing than the glare in her intact eye.

“Will someone tell me what the hell is going on here?”