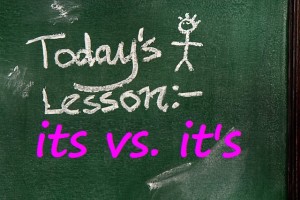 I first began to notice it many years ago. Some people had trouble with its and it’s, a common confusion. But then it began to spread, like a cancer, across Facebook and Twitter, those bastions of common usage and colloquialism. When it began showing up in writers’ forums, I knew it was reaching epic proportions. The virulent, creeping Disease’s of the Apostrophe’s.

I get it when it comes to the its and it’s. Most possessives have an apostrophe, as in Pandora’s box or Burke’s law. But pronouns (which it is) don’t — like his, her and their. The apostrophe in it’s is because it’s a contraction (of it is), not because it’s a possessive case.

Just because a word ends in s doesn’t mean it needs an apostrophe.

To add to the confusion, in possessive cases, the use of apostrophes changes with the number of objects. A singular object, my sister’s book, requires the apostrophe between the noun and the s. However, if I have 5 or 10 sisters, and they all have books, then it becomes my sisters’ books — apostrophe after the s (which signifies the plural).

Then the whole issue devolves into the murk when we use the possessive of a noun that ends in s. Mr. Jones’s car. Strunk and White, in their Elements of Style, insist that we always use the additional s, and the Chicago Manual of Style says either with or without is correct, but they prefer the additional s, as well. There are some arguments against that, however. I’ve seen some discussions that insist that Strunk and White wrote almost 100 years ago and so are a bit outdated, and that the second s is never needed. Others say it depends on how the word is spoken. If the second s is spoken, it’s necessary in the written word. Phonetically, if we’re saying Mr. Jones-es car, we need the second s. If we’re saying Mr. Jones car, then we don’t. This is one area where it seems to come down to personal style. My own preference is no second s (seems cleaner to me), but obviously I’m not the one making the rules here.

Now, is all that perfectly clear?

Just make sure you get your apostrophe’s in the right place’s, and make sure you really, really need them. Remember, if your word’s are not possessive’s or contraction’s, they don’t need apostrophe’s at all. Don’t fall victim to the Disease’s of Apostrophe’s.

[If you need a refresher on the basics of apostrophes, please see Cathy Speight’s article.]

22 thoughts on “A Writer’s Bane: The Disease’s of Apostrophe’s”