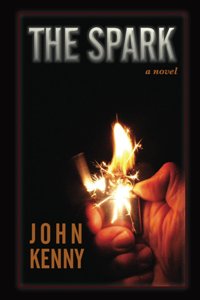 The Spark
by John Kenny
Genre of this Book: Action Adventure/Thriller
336 pages
4.8 average on 19 reviews

Searching for the truth is the most dangerous thing firefighter Donny Robertson will ever do.

The blaze in the old factory has left Donny physically and mentally scarred. And Fitz was dead, nothing was going to change that. But everyone is eager to put that tragedy behind them – there were no traces of arson and no signs of foul play.

Donny needs to regain his confidence and earn the trust of his crew and colleagues. It doesn’t help that he’s convinced the fire was no accident. Is it the set of curious coincidences, or is it simply Donny’s inability to let go of the man who had been his friend and mentor? And where was the line between loyalty and obsession? Was it worth losing his job, his home and his relationship?

As pieces of the puzzle begin to fit together, evidence and people start to disappear. By the time Donny realizes he’s over his head in a world of corporate intrigue and murder for hire, it’s too late. He’s become a loose end and someone is cleaning up. Framed for the murder of his last remaining lead, Donny realizes his only chance is to find and confront the person pulling the strings. It’s a desperate plan and it will cost him everything he has left.

This book is available from Amazon.com, Amazon UK, and most major online retailers.

Exclusive excerpt from The Spark by John Kenny

The radio crackled to life. It was Spike. “The hydrant’s no good. The spindle’s seized or something. I gotta get another one.”

“Roger. Make it quick. We got the lady. How much water we still got, Moose?”

Donny keyed his mic again. “How you doing, Eddy?”

“Just barely holding it. We need a second line,” came the terse reply.

Damn, this was not good. There was no way they could get her out alive going down the stairs through the fire.

Scooter’s voice came on the radio. “Everyone’s out next door. Hang tight, Donny, we’ll get you that hydrant and bring a second line.”

“It’s too hot to wait for the hydrant, Scooter. We’re bailing.”

Donny took a pouch from the pocket on his bunker pants. He pulled the end of a rope from the pouch, wrapped it around the pipe of the radiator beneath the window and clipped the rope back on itself with a carabiner. He threw the pouch out the window and the thin red escape rope snaked down three stories to the ground.

The woman was coughing and moaning incoherently now. Sirens wailed and the radio crackled with the arrival of more crews.

“Susan, we’re going out the window. Lady, I’m going to clip this rope onto Susan and she’s going to take you down.”

“Quarter tank, Cap.” More good news from Moose. Eddy had forty-five seconds of water left at most. Donny clipped the descender that was threaded through the rope onto Susan’s SCBA straps.

“I’ve only practised this once, Cap, and never holding someone else,” Susan said nervously. “Maybe you should take her.”

“You’re hooked up. Now get out there. There’s no time for this.”

Susan climbed out the window, turned, and braced her feet against the wall. “Ready!” she called.

Donny lifted the woman towards the window. The heat hammered on them. “I can’t do it, I can’t,” the woman moaned.

“Yes, you can, and you’re going to, or I’ll throw you out the window! Hang onto Susan. Hang on and don’t let go for anything.” He saw her clasp her arms around Susan’s neck. Susan put one arm around the woman’s waist and eased the rope through the descender with her other hand as she walked backward down the wall.

“I’m dry,” Moose called over the radio. Donny could feel the sudden surge of heat.

“I gotta pull back till they get the hydrant,” Eddy cut in. “Your best bet’s the window, Donny. It’s coming up the stairs.”

“That’s my plan once they’re down,” Donny answered. He lay flat on his belly, getting as low as he could under the deadly heat. The scars on his neck and shoulders were screaming. Time slowed to a trickle.

He watched the orange glow brighten in the smoke, moving closer. He knew the fire was swirling up the stairs, spreading across the ceiling, reaching towards the window. It was coming to reclaim him.

What was he doing here? They had offered him any number of desk jobs, a training officer position, anything he wanted. Why had he insisted on coming back to the trucks?

Anger, fear and regret welled up inside him. It seemed like every emotion he had ever felt, ever denied, all surged, threatening to shatter him into a thousand glowing embers.

Then, like a towering wave, it broke. In a crystal moment, terror and remorse melted away. There was only what needed to be done. He had to wait. The escape rope was meant to hold one person; it might hold two, but it couldn’t take the weight of three bodies.

The seconds stretched into eternity.

“We’re down. Get the hell out of there,” the radio barked.

Donny rose to his knees. The heat was a razor-edged juggernaut driving him back down. He reached for the rope, gripped it tightly, and flung himself out the window. The slick red nylon slipped through his leather gloves as he slid down the side of the building.

Suddenly he was weightless, floating. He saw the melted end of the rope drift above him, a ruby snake weaving lazily in the clear sapphire sky; then there was a thump, and the blackness closed around him.

One thought on “Sunday Book Showcase: The Spark”