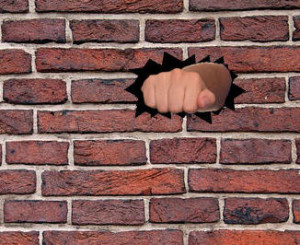 Recently I was beta-reading a book for another author and found an annoying recurrence of what I consider to be a newbie mistake. The book was fiction, telling the story in omniscient third person as if the reader were a fly on the wall watching the drama unfold. Good enough as far as it went, but then suddenly, with a single word, it catapulted me right out of the telling.

I’m going to dummy up an example here.

Rodrigo had to feel his way in the darkness. He slid his hands along the rough, moist walls of the cave, moving his feet cautiously so as not to trip on loose rocks or step blindly into a hole. The complete absence of sensation befuddled his brain; his eyes strained to see and his ears pounded with the surge of blood through his veins. It was so quiet, you could hear a pin drop.

Pardon the cliché there, but the point is, with the use of a single word — you — the author successfully destroyed the container of fantasy she had been painstakingly creating, and in doing so, popped me out of the story faster than a blatant spelling error. With that one word, she ripped away the fourth wall, and with that construct gone, the entire house of cards came falling down.

If you’re not familiar with the fourth wall, it’s actually a stage concept. When we’re watching a live production on stage, the fourth wall is the imaginary barrier between the stage (and the actors on it), and the audience. The barrier is invisible but implied; its presence gives us that fly-on-the-wall feeling as we watch the drama play out. We see everything that goes on but the characters are totally unaware of us. This fourth wall is sacrosanct and generally not to be breached.

I say generally because, of course, there are exceptions. We’ve all seen plays or movies where a character suddenly turns to the audience and speaks directly to them. In the movie Wit, Emma Thompson does this throughout the film, but she established early on that she was telling us her story of dealing with cancer. She was the narrator as well as the main character, and her speaking directly to us helped to move the story along. The device is probably used more often in comedy, when a character plots a scheme or joke and turns to the audience with a wink to pull them into the plot. Used sparingly, it can be effective.

But in third person fiction? It doesn’t work for me. I want to suspend belief in anything other than the story. I want to sink into it, be engulfed, be submerged, float contentedly in the warm waters of fantasy with nothing expected of me and the characters none-the-wiser to my existence. As soon as the writer starts to speak directly to me, she breaks that fourth wall, drags me into the scene (grumbling) and has lost the hold she had over my imagination. To the consternation of both of us, it will take me a bit to get back into the story.

43 thoughts on “Addressing the Reader: Breaking the Fourth Wall”