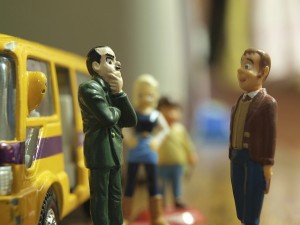 I hadn’t heard the expression “talking heads” before, but I just had an editor point it out to me. Suddenly I realized how guilty I am of writing scenes with talking heads. You know, the ones where the characters are chatting away in a blank space with nothing around them to ground the reader and transport them into the scene.

Yes — that is what “talking heads” means. Writing a scene with no anchors. Creating a sequence of dialogue between characters that isn’t placed in a vivid setting or surrounded with the right emotion.

As brilliant as your dialogue and physical beats may be, if they’re not placed in the right setting, they’re going to fall short. So, how do you create these anchor points and add that extra punch needed for a scene?

Well, the first thing you need to do is figure out the best setting for whatever you have planned for your characters. If they are going to be getting in to a “deep and meaningful” conversation, a loud rock concert is hardly the best setting. If it’s going to be an action-packed thrill ride involving a chase sequence and gunfire, then a stadium full of partygoers and blaring music might be perfect.

I sometimes forget to take into account how important a setting can be. It can establish the perfect tone for the scene and really bring the reader into the kind of emotional place you want them. Don’t forget to consider all the senses: sound, touch, taste and smell. Think about the weather, the temperature, the light in the room. All these little things build on top of each other to create a scene that is full and rich in the reader’s mind. As one of my writing mentors always used to say: paint a picture with your words.

Let’s put our characters in the main street of a suburban town on a slightly overcast day. For our first example, we’ll get inside the head of the character that has just been given a promotion for a job – he’s been working really hard for that. He will no doubt be in an upbeat mood, feeling proud of himself and seeing the positives in the world. He’ll probably notice anything to do with achievement and empowerment. He’ll be honing in on the upbeat music coming from busker across the street, the laughter of the high school girls passing by. He might glance up at the sky, noticing the trail of light gleaming beneath the biggest cloud. He’ll breathe in the fresh air, finding the hint of moisture refreshing.

Now let’s jump into the head of another character, however this one is dealing with a bitter break-up. She will be interacting with her setting in a very different way. The upbeat music might grate on her nerves, feeling like an attack on her senses. The laughing girls will be a bitter reminder of the carefree way she used to view the world. Instead of glancing up at the sky with a hopeful smile, she will be noticing the clog of traffic, the honking of a car horn or the wailing baby in the stroller.

This setting and these moods can all be incorporated into the dialogue and will enrich the scene for the reader. You don’t need to mention everything, but even adding a few setting beats to accompany your physical beats will help place your reader in the scene and you can avoid a case of “talking heads.”

Are you guilty of doing this? Getting so caught up in what your characters are saying and doing, that you forget to anchor them?

12 thoughts on “Talking Heads: Dialogue Scenes in Your Book that May Lack Punch”