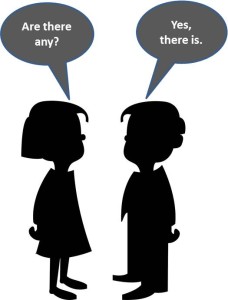 “There’s two ways of disliking poetry; one way is to dislike it, the other is to read Pope,” said Oscar Wilde.

No, of course he didn’t say that.  What he said was:

“There are two ways of disliking poetry; one way is to dislike it, the other is to read Pope.”

When I’m in grammar-nazi mode, I’ll often find myself jumping up and down in front of the TV, yelling and growling at the misuse of basic grammar. One of the errors that’s guaranteed to get me into a right lather is the incorrect use of ‘there is’ and ‘there are’. For instance:

Is there many ways to do this? (Incorrect)
There’s two more episodes of The Following. (Incorrect)

So, what’s the deal?

The verb and its subject should agree. I.e. Singular subjects should have singular verbs and plural subjects need plural verbs. (Did you ever have to conjugate at school?  As in:  I am, you are, he is, etc.?)

In the instances above, the subject of ‘is’ or ‘are’ is not ‘there’.

Let’s try changing some sentences round:

The last example, however, is probably a little redundant because the error is virtually always in the use of the singular form of ‘to be’ when it should be the plural.

Words like ‘lot’, ‘any’ and ‘some’ will take the form of the verb that should agree with what follows, e.g.:

If you’re in any doubt about what form of ‘to be’ should follow ‘there’, put the subject in front of the verb to help you determine whether it should be ‘is’ or ‘are’.

27 thoughts on “Grammar Tip: There Is vs. There Are”