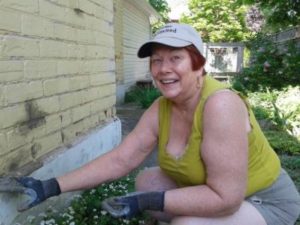 My mind wanders when I work at something manual. And often it wanders in the direction of writing. So perhaps it’s not surprising that when I was working on a house repair, it occurred to me that the process could be compared to editing.

Our little cottage was built in 1883. The previous owners had done some repair to the brick, much of it badly. Restoring it to its original state was out of the question.  Leaving it unattended was also out of the question unless we wanted it to fall down around our ears. Well, maybe not quite, but you get the picture.

I am more handy than my dear hubby (he brings home the bacon), so the work fell to me, including pointing and repairing the spalling brick and mortar. My good neighbor, a tradesman, gave me a lesson in masonry.

So how does this relate to editing? I thought you’d never ask.

When we write a book, our first draft is usually rough, just like my house was before I began.  The plot has holes in it. The characters need smoothing out. The sentences are rough. Words need to be removed. Some need to be added.

Sort of like my poor house. There were holes in the mortar. Some bricks had lost chunks out of them. The previous paint had blistered and flaked. Some bricks had lost entire surfaces. The repaired patches looked rough and ugly. And we had bricked in one window that stuck out like a sore thumb.

When I finish my first draft of a novel I set it aside for a bit. As it settles, the warts begin to show and I see where I need to makes some changes. That window we bricked in is a big plot hole. It needs to be blended in with the rest, so that it flows like a continuous wall.

The first editing run-through is like scraping the old flaking paint off to reveal all the errors, all the holes I didn’t notice before, all the spots that need repair, all the chinks in the mortar. I see that there is much more work to do than I anticipated. Sigh. But I also see that the bones are good, my story, the foundation, is solid. It just needs a little work. Well, maybe a lot of work. But I can do this.

Those spalling bricks are characters that need to be filled in and smoothed out. Those holes in the mortar are sentences that need to be reworked until they flow as they should, just like I fill in the bricks and patch the mortar.

Then I inspect my work several more times, catching small things I missed the first time, until I am satisfied that I won’t find any more.  But it’s still not finished. It needs a final polish – or two. That’s the paint. The first coat warms my heart. The transformation is amazing. I’m beginning to fall in love with my story, my house, all over again. But wait, I missed a spot – and another – and another. OK, time for a second coat, a second polish.

Yes, now it’s what I hoped for. It’s the best I can make it. Is it perfect? No. There’s a spot I missed, a typo that got by me. And that’s where I’m so lucky to be Indie. If I had hired someone to do the job I’d have to live with those spots. But since I self-publish, I can touch them up with a brush as I see them, or as someone is kind enough to point them out to me.

So, as with my forays into home repair, I am happy with the result. I have a home, and a book, I am proud of. And I did it myself.

20 thoughts on “Is Editing a Book Like Home Repair?”