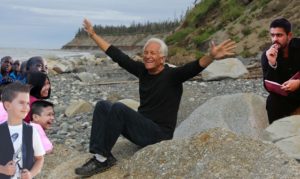 Lately I’ve been working on a project recording people’s personal stories and editing them for publication. While creating these transformations, I have gained a new appreciation for the difference between a work told by a storyteller to a live audience and something written by an author for the reading public. Storytellers who want to write their stories down run into so many problems because some elements of the storyteller’s art just don’t translate to written form. Since the ability to tell a story is one of the key items in every writer’s toolbox, we all tend to slip into storyteller tricks. Watch out for this slippage; often it doesn’t work.

Which couldn’t be farther from the truth.

While all written stories need this structure, storytellers actually tell two types of “stories.” The first is the traditional tale where the usual forms apply. But often the storyteller is not recounting a narrative. Many of the tales we hear from the old folks are not stories at all, in the literary sense, but setting descriptions. You know. “When I was a young’un we had to walk to school barefoot through two feet of snow, uphill both ways.” And the storyteller goes on, telling his or her rapt audience about a life that is so different from nowadays that they are fascinated.

Storytellers also relate to their audience by starting with a shared idea or character. “Remember old Silas and how he used to…” And everyone who knows old Silas gets a great deal of enjoyment out of a shared (or new) perspective on the character. The immediacy of the first person narration adds to the emotional impact of the live performer, and the description becomes the entertainment.

Writers don’t have that luxury. At the moment, I am editing for a non-literary writer who wants to get his stories down in short story form. He begins each tale with a loving description telling us what each character is like. Every one. Sometimes it takes up a third of the story. Arm wrestling over the Internet is so frustrating.

If you look at novels from a couple of centuries back, they are full of description, because novel writing evolved from storytelling. Modern readers consider that sort of lengthy description an intrusion by the author and an impediment to the flow of the story. As an author, you simply don’t have the immediacy with your audience to make it work. They don’t want to hear your voice at all.

The problem I see over and over again with beginners who started writing because they had stories to tell is that they want to tell everything happening in the character’s mind. An aside from an actor in a play or a voice-over in film fulfills this purpose.

In a written story, it doesn’t go over well. You want us to know she’s sad? The storyteller

tells us she is sad, and can help show it by performing it. The writer shows us by what she says, how she moves, her expressions. As a writer, you don’t want to be seen “telling.” Your characters do the work by “showing.”

So one of the real differences between storytellers and writers is that the storyteller is front and centre, while the writer tries to fade into the background.

A storyteller has two tracks running simultaneously as he performs: the plot of the story and how he’s going to perform it. When he writes it down, he tries to put in both tracks. Storyteller performs, “He screamed,” in a pathetic voice, so he writes, “He screamed pathetically.” Thus the storyteller’s writing is full of adverbs. It’s like listening to a play with all the stage directions told out loud.

Because storytellers also want to tell what every character sees, storytellers tend to head-hop without warning. A performer can make it obvious who is talking by gesture, position and habitual traits. When you’re writing it down, you have to be clearer exactly whose shoulder we are riding on.

The storyteller quite often uses the indirect dialogue form, “He said that he was going home,” instead of direct dialogue, “He said, ‘I’m going home.’” It’s a bad habit to get into as a storyteller, and it’s a terrible one for a writer. It removes the immediacy of direct dialogue by putting the author between the character and the audience. It also leads to using more adverbs in an attempt to reintroduce the emotion that has been left out. This technique is useful for getting information across when writing the whole scene would be distracting, but is otherwise just lazy. Show us what happened!

Storytellers are pretty much stuck with chronological order. The audience only has one chance at the material, and they get mixed up really quickly if you don’t tell the story as it happened. With a nonfiction story, the order of the events may not be perfect for creating the best narrative.

This takes us back to the narrative arc and the emotional build of a good tale. A novelist creating a story is aware from the very beginning of the need for an inciting incident and then a series of escalating events leading to a climax, causing change in the character or society.

When the Fates are writing the stories of our lives, they have no such restrictions. They may start the drama with the biggest scene and then have three or four smaller incidents that wrap up the tale. When a storyteller, whether vocal or written, is dealing with that sort of story, it is very difficult to make it work. The audience or readership is so used to the standard format that if you start with a bang, they expect that succeeding explosions will be even larger. If they aren’t, then there is quite a letdown.

So, in your own writing, watch out for storytelling techniques that don’t translate. Remember, the storyteller is allowed to “tell.” Often the “showing” is done through live performance skills. A writer has no such crutch, and if you try to use it, your work will falter.

15 thoughts on “6 Key Differences Between Storytelling and Writing”