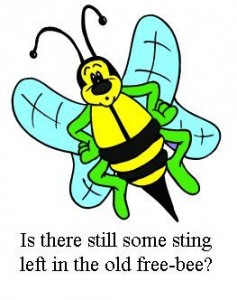 My favorite saying about indie publishing is, “The only constant is change.” There’s no such thing as a long-term, set it and forget it marketing system that will continue to work to sell books year after year. I’ve employed half a dozen different primary strategies (and dozens of minor ones) over the last six years to market my books, and I have no doubt I’ll be adding more this year. We have to be like sharks — never sleeping, but constantly moving forward.

It’s been a while since I wrote something about how to gain more visibility for your books, so let’s dive in to one of my favorite methods — free runs. There is a certain segment of authors who believe that we work too hard on our books, and that we should never give them away. Essentially, they believe we devalue all books by choosing to give our books away. I was once one of them. Then, I too gave it a try. Five years later, I’ve given away almost half a million books, and in the process, I gained a career.

Let’s start with a quick overview of how free has evolved over the last five years of indie publishing.

There was a glorious time from 2012, until March of 2013, when the Amazon algorithms rewarded giving away large quantities of books. I happened to publish my first book in September of 2012, so I caught a bit of that beautiful wave. At that time, the Amazon algorithms gave you a boost equal to a sale for every ten free books that were downloaded. My first free run, I gave away 24,000 books. So, as far as Amazon was concerned, they gave me an algo boost that was equivalent to having sold 2,400 books in a short period of time.

That boost, by the way, appeared on the Popularity List, most commonly known as the “Pop List.” It’s the list that shows when people browse for a new book on their Kindles. In other words, it’s very valuable real estate. During this time, it was easy to be a successful indie. Give away a lot of books, get the algo boost, then sell a ton of books at full price.

For whatever reason, Amazon downgraded the impact that freebies had on the Pop List in the spring of 2013. That’s when people started migrating away from free runs, to a certain extent, as they didn’t pay off with the same jackpot anymore. In the glory days, it was possible to make excellent money with a single book. Once the algos were suppressed, a more robust back list was required.

I still used free runs after that, because there were still advantages to be gained. Every time I did a large free run, I got a lot more sign-ups for my newsletter (sometimes 200 or more), new people liked my Facebook page, I got a ton of audio book downloads, etc. Essentially, free runs built my platform. For those who say that people who download freebies will never pay full price, I respectfully disagree. I estimate that well over half my platform came from freebies, and I am happy to report that they continue to buy my books at full price. It’s all part of the “getting to know me” process.

Now, to the question at hand: Is it still profitable to do a free run in 2018? My answer is a qualified “yes.” Let’s look at both sides of the equation.

There are things that work against good free runs these days. For one, it’s much harder to get those massive download numbers. Bookbub (the greatest source of massive free download runs) has gotten more and more difficult to get into. Other sites don’t deliver anything close to that kind of bang for the buck. Also, I believe people have “freebie fatigue.” They’ve downloaded so many free books that their Kindles are stuffed past overflowing. That means that the percentage of people who actually read your free book has plummeted over the last few years. If they download and don’t read, you don’t get much benefit from it.

But, I’m still an overall “yes” on free runs, at least in select situations. Here are the factors that combine to make for the best free runs: first in a series and in KDP Select. Let’s say you do a moderately successful free run, and get 5,000 downloads. Even if only 2% of those people read the book, that’s still 100 new readers. If you have a long series, and good read-through, that can equal an excellent return over the next few weeks and months. Plus, those 5,000 downloads will still get you some algo love on the Pop List, and that translates to a nice bump in Kindle Unlimited page reads which can last for a month or more.

However, if my book wasn’t the starter of a series, or wasn’t in KDP Select, I don’t think I would do a free run for it in 2018.

One other thing. What if you can’t get a Bookbub for your book? That’s not unusual these days. You can always build your own mini-Bub by stacking ads with other newsletters. When I do this, I use Freebooksy, Free Kindle Books & Tips, Bknights on Fiverr, eReader News Today, and possibly one of the genre-specific sites, like Book Barbarian or Romance Reads. When I put a list like this together, I typically get somewhere between 5,000 and 10,000 downloads. It’s not a Bookbub, but it’s much easier to get.

13 thoughts on “Free eBooks: What Used to Be and What Works Now”