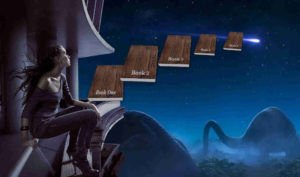 Common wisdom has it that, as an Indie, it’s a good idea to write a series. You price the first book as free or $.99 and set the rest at a regular price. Once readers are hooked, you can pretty well count on them to buy the others. Loyal customers and all that.  But inherent in the multi-book series, you have two main problems.

First Problem: Will Book 2 Match Up?

Sure, you poured your heart and soul into the first book and created a masterpiece. You got all those wonderful reviews from Aunt Molly and your bowling team and even a few legitimate customers. But there is a tendency in writers to think they are operating under a different set of rules for the second book. How can I put this nicely? They slack off. All those beautiful levels of conflict flatten out into one simple problem.

Too many times I review the second book in a series and find it emotionally inferior to the first. The author falls in love with the characters, assumes the readers have, too, and writes a bunch of drivel showing them all having a fun time together. Not good enough. So you had an original idea for the conflict of the first book. Dig down into the nitty gritty, because you need just as original a problem for the second one.

One problem with the second book is that all the great conflict among the good guys that added to the interest of the story was solved at the end of the first book. The team has learned to work as a team. The misunderstandings have been cleared up. The on-again-off-again lovers got hitched. Now their relationship is like that of an old married couple: boring.

Even worse, that gut-wrenching desire that drove the main character, that archetypical twisting of the soul the readers empathized with? Remember, you solved it. It’s gone. This is especially true of Young Adult and New Adult books. The whole point of the story is growing up and moving on. So what conflict is going to match up in the second book? If the first book ended properly, you can’t revisit the old conflict. There is only one first love. Your father can only die once. You only start high school, the Space Academy, or the Wolf Pack once in your life.

A. Try a New Main Character

Take a hint from one of my favourite authors, the late Anne MacCaffrey. Her Pern series went on and on and never lost its freshness. How? She kept changing main characters. Leads in one series became supporting roles in the next. She wrote the first books about Lessa. Then she wrote the Dragonsinger trilogy about Menolly. Then she did a stand-alone that brought them all together in The White Dragon.

Then she went back in time to the first settlers of Pern and, without missing a beat, switched from Fantasy to Science Fiction and pulled us in again. Very clever.

The other technique she used was having a unique conflict for each book, but a basic underlying conflict that flowed through the whole series. Two, actually. One was Thread, the environmental hazard, and the possibility of finding a way to destroy it. The second was the mystery of where the people of Pern came from. She spun her stories off in all directions, each time creating a new main character with new problems to fit in with the old setting and characters we loved, and the overarching conflict we hoped would be solved.

The woman was a genius.

But the second book is only one problem. What about the first book?

Second Problem: Will the First Book Match Up?

I know. It sounds like I wrote this backwards, but this is a self-correcting problem, so we don’t see it so much.

You see, we’re not all geniuses. The biggest problem you can have is that you tend to write the first book in the series first. Yeah, I know, but I’m serious. That’s not necessarily a good idea. We all get to be better writers as we go along, but if the first book is a dud, no matter how good later books are, nobody will ever get to them.

The Solution (Do not try this at home without proper supervision.)

Write the later books first. I know that’s counter-intuitive, but you have to find some way to practice before you write that all-important first book. At least write an introductory short story. You can use it for promotional purposes later. And by the way, don’t actually publish Book 4 first. I know from bitter experience that, in spite of what George Lucas did in Star Wars, no one will buy Book 4 if Books 1 – 3 are not available.

And on a similar theme, do NOT make succeeding books depend heavily on reading the first one. If you make every book an entry point to the series, you have a much better chance to sell books. It may take some careful writing in the first chapter to bring everyone up to speed without a huge information dump, but it’s worth it.

The Other Solution: The Serial

Okay, so you want to duck all these problems. Don’t sell a series. Sell a serial. Write a 400-page book that ends on a cliffhanger, thus forcing entranced readers to wait in agony for Book 2, which will end on another high point, and you write your way merrily through the years, popping off to the bank regularly to make big deposits.

Ignoring the anger that readers feel because the author promised us a novel and instead sold us a 400-page trailer for the series, every one of the epic serials I have read has a worse problem.

They have actually not ducked any of these problems at all. The books are not structured as novels, so they tend to be episodic and unsatisfying, missing a cohesive story arc and a crafted emotional experience for the reader. A serial novel is like a comic book (surprise, surprise). Character development goes nowhere. The author is forced to depend on pornography of a sexual, visual, emotional, or violent nature to create the emotional rollercoaster that is supposed to come from empathy with a character experiencing a crisis that we understand, and the catharsis we feel when the problem is solved.

But if you know your audience, you can sell a serial like that, especially to the YA crowd, whose experience and expectations are less demanding. Just do us all a favour and tell us it’s a serial at the beginning, so we can avoid it if we choose.

Final Note About any Series

Be upfront about what kind of series you’re selling. Is it a continuing series, a set of standalone novels in the same setting, or a non-stop serial? Surprised readers are often unhappy readers, and their reviews will reflect their disappointment.

7 thoughts on “Writing a Series: Pitfalls and Solutions”