Bookstuffing works like this (don’t try this at home!): In an effort to get the largest possible payout on Kindle Unlimited borrows, certain authors have been shoveling several books into a single book file and marketing it as a single book. Sometimes they reuse the same bonus books multiple times; David Gaughran recently shared a chart that shows how an author named Cassandra Dee does it (again, please don’t try this at home!). These authors will put a come-on at the front of the file to entice readers to click to the last page of the book in order to enter a contest or get a free short story; the bots at KU then count the whole book as read.

The bigger the file, the bigger the number of pages, right? So the more pages read, the bigger the payout per book. Bookstuffing is, in fact, extremely lucrative: Cassandra Dee is Amazon’s #1 Contemporary Romance author. Until his downfall, Chance Carter was also a highly-ranked Contemporary Romance “author” (he reportedly used ghostwriters) on Amazon. Each of these authors routinely takes home one of the monthly KDP Select All-Star bonuses – leaving a smaller pie for the authors who play by the rules.

The thing is, all of this has been against KDP’s Terms of Service forever. So why hasn’t Amazon cracked down on the practice before now? I don’t want to cast aspersions, but top-earning bookstuffers often plow a chunk of their earnings back into Amazon by buying AMS ads for their books.

Amazon did make a change this month to its Terms and Conditions for bonus content. You can find the whole rule here, but briefly, it appears indies can avoid Chance Carter’s fate by making sure they follow a few simple rules:

1. Putting bonus content (like a sample chapter or a short story) in the back of your book is fine, but make sure it’s no more than 10% of the size of your book.

2. It’s okay to include a link for readers to sign up for your newsletter, and it’s okay to offer them bonus content (like a short story, not like a free Kindle!) for doing so. Just don’t put a link in the front of the book to the newsletter sign-up link in the back of the book.

4. If you decide to publish several books in a single volume, clearly label it as a collection or an omnibus edition or “the complete series” or something like that.

So what happened to Chance? He’s been booted. I just looked up his author page on Amazon US. By all reports, he once had 30 or so titles for sale; he’s now down to three, all of them paperbacks offered by third-party sellers. His Audible books are gone, too. 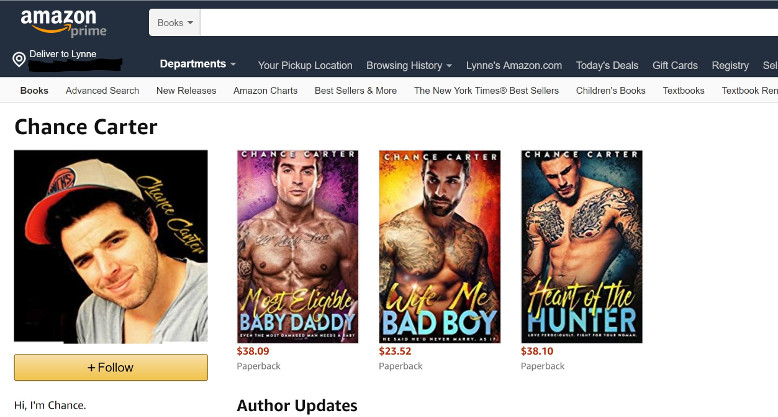 It’s unclear whether KDP kicked him out because of bookstuffing or because of some other Terms and Conditions violation. And it might be that Amazon decided to make an example of him; so far, it’s still business as usual for other known bookstuffers, although some of them have added the word “compilation” to some of their titles.

Personally, I intend to keep playing by the rules, and I hope you guys will, too. I’d hate to see any IU fans in a situation like Chance’s.