Recently I tried to edit something I had written, only to find that Pro Writing Aid wasn’t working. I could load the document, but it wouldn’t perform the “Analyze” function. This has happened for short periods before, and I assumed it was a marketing trick – a nudge to get going and buy the real version. But this time it went on for several days. What was happening?

So I logged on to the site to find that Pro Writing Aid is touting a “Beta Version.” Perhaps they had disabled the old free version to nudge people to try the new one. Okay, it worked on me. I thought I’d try it.

Since my last article, I have used the old app quite a bit and become used to it, so I expected to be hard sell. Yes, the new version makes it easier to pick and choose each specific type of error you want to chase. As you can see from the graphic of the new version (see image below), the menu across the top is very handy.  But they have made a basic change in the way that they show your errors, and that removed the most useful tool of all. In the old version, you clicked on “Grammar” and got a page selecting every paragraph with a grammar error referenced, and a one-sentence description afterwards of each error. Because most online editing involves ignoring the many false alarms that arise, it was easy to scan down and pick out the real errors. 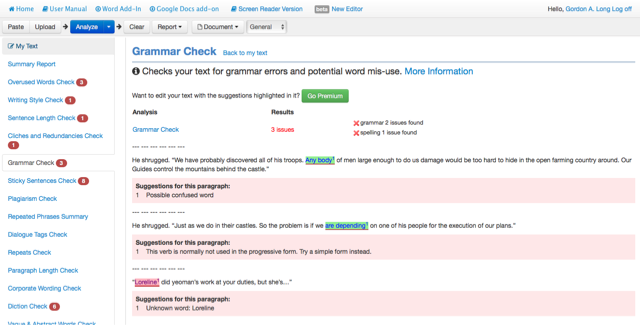 Now with the new version, you work right there on your document, with all errors in front of you. If you have a few errors, it works. But especially for the “Echoes” tool, which picks up far too many repeated words including names, you are presented with a mass of colour-coordinated underlining, making it a hassle to pick out the real errors. In the example below, there are only three pairs that I will change.

Besides the overkill, there is one basic flaw in the new display method. In the old version, you worked on your own document, finding errors Pro Writing Aid pointed out and fixing them. Now you do your editing on the online screen and cut-and-paste the corrected work back to your MS.

This sounds fine. Great for your Christmas Brag letter, I’m sure. But anyone who formats Word documents for publishing knows that if you cut-and-paste pieces of your document into other formats – onto your iPad, for example – and then transfer them back, they pick up extraneous formatting like a black wool coat in a pack of golden retrievers, and it can take hours of debugging before the Smashwords Meat Grinder will accept your MS.

It also removes the “Review” function of Word completely, because when you paste it back, the whole document becomes an edit.

They have also not solved the program’s annoying habit of removing spaces between words and then finding the omission as an error. For example, in the Grammar Check you see, “showing the qualityof the fuel we process” listed as an “Unknown word.” But you look in your document, and you see, “quality of,” right as rain. It is possible that this only happens on Macintosh computers, or perhaps on LINUX platforms, or on computers where people type left-handed, for all I know. Fact is, the error exists in both the old and new versions – I admit it is not so frequent now – so this reporter is reporting it.

In desperation, I signed up with Grammarly. This is a functional program, but without the scope and power of Pro Writing Aid. For example, consistency in capitalization and punctuation is very difficult to edit for, because it happens over the whole document. Grammarly does not perform this task.

However, so far Grammarly has functioned seamlessly with my Facebook and WordPress work, underlining spelling and grammar errors as I type online, so I’ll be keeping that one as well.

Fortunately the old generation of Pro Writing Aid has returned to full power on my computer. I guess they got what they wanted when I signed up for the beta version. I’ll keep using that one until they put it out to digital pasture, in spite of the fact that they say it handles 3,000 words in a bunch, but it tends to cut off under 2,000 without warning. After that, I may be looking for a new program.  Ideas, anyone?