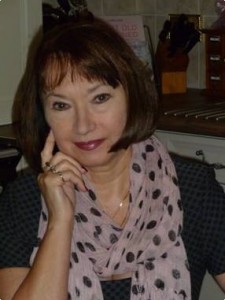 Julia Ibbotson is the award-winning author of The Old Rectory: Escape to a Country Kitchen, first published to acclaim in the USA and now re-launched with a brand-new cover by her new English publisher in the UK. Julia has been writing creatively all her life (unpublished!) but her day jobs to pay the mortgage have been as a school teacher and latterly a university academic, gaining her PhD at the age of 57. She delights in being a wife and mother to four, with four little grandchildren. She loves reading, gardening, growing food, cooking for family and friends and country life. Having published many academic texts and papers, she came late to actually publishing her creative writing, at the age of 60 plus, when she was persuaded to write the story of the renovation of her Victorian rectory in The Old Rectory. She has combined memoir, history, research, story and recipes in this first published book, which has won a number of international book festivals in the biography category, gained 5 star reviews on Amazon, and has been widely featured (along with her house) in the media. She has begun to delve into the world of blogging, facebook and now has her own website at www.juliaibbotson.com at which she also posts blogs regularly, about writing, life and her passions. Her new project is a trilogy of novels following the life story of a new character, Jess, through from fleeing to West Africa as a volunteer teacher/nurse in the 1960s to the millennium. The first of the series, Drumbeats, is due to be published later this year. You can find out more on her website and on her author page on Amazon. Her global internet book tours start soon! END_OF_DOCUMENT_TOKEN_TO_BE_REPLACED

2012 is about to be history and what better way to celebrate than reading a little history ourselves? Here is a selection of historical titles from Mark Coker’s Smashwords. Remember, Smashwords is your alternative to mighty Joe Amazon. As an independent author himself, Coker relates to the trials and tribulations of the indie in a way that eludes Amazon, so let’s show him a little support!

If you have a historical title we missed, feel free to put your Smashwords link in the comment section below.

Just click the covers to take a look or buy the book!