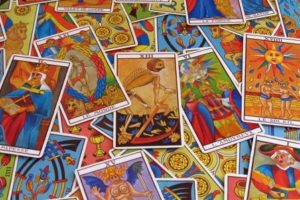 Um, well, actually, lots of people have. Goodreads even has a list of books in which a Tarot reading figures in the plot. And that list is hardly exhaustive. I can think of two books published in the late 1960s whose authors used Tarot, or a variation on Tarot, as a plot device. One is Samuel R. Delany’s Nova, in which the main character, a member of a spaceship crew, palms the Sun card so that a crucial reading cannot be finished – thereby jeopardizing the ship’s mission. The other is actually a series: Roger Zelazny’s Amber novels, in which the characters correspond to certain cards in a Tarot deck. END_OF_DOCUMENT_TOKEN_TO_BE_REPLACED